Avalanches: Plenty of Wind Slabs form yesterday’s cycle to be viewed. Call it 20 or so. Vast majority were D1 to D1.5. 2″ to 5″ crowns. A few D2’s with crowns up to around 20″ thick. Most crowns didn’t propagate widely across the majority of the start zone, while a few of the larger ones had some good propagation. There is still something to be said for a propagating 2″ slab. North to east to south near and above treeline covered the majority of the activity, I didn’t see anything on west.

Weather: Beautifully day. Few clouds and the winds in the alpine remained calm to light.

Snowpack: Yesterday’s wind event did a better job then I expected, of pressing the snow into terrain versus stripping it back to the old snow surface. Some slopes were of course blown back to the old snow surface, most had at least 2 inches, to 2 feet of new snow on them. Maybe 18″ of new snow in this snow favored area, but it feels silly to give a number with all the variability out there.

The facets and soft crusts around the old snow surface were something to keep in mind. We chose to ski some wind-loaded terrain and avoid others. So the assessment portion was there. No obvious signs of instability. The new snow was either very light, thin with a little cohesion, or thick and set up.

The northerly slopes in the alpine stayed dry. While many others were feeling the effects of the strong April sun. I suspect that many of those sunny slopes with thin slabs will be crusty tomorrow. 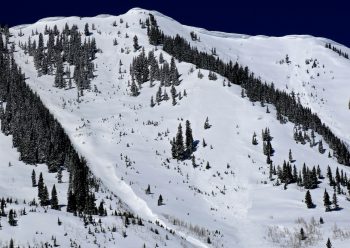 Schuylkill Ridge. D.15 on a cross loaded easterly slope, and a smaller avalanche near the ridge. 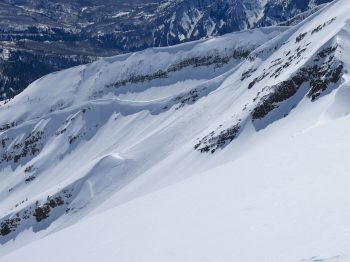 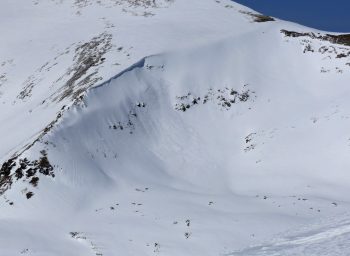 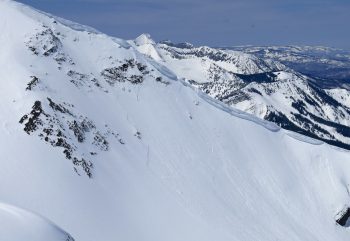 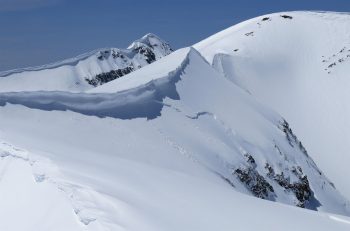 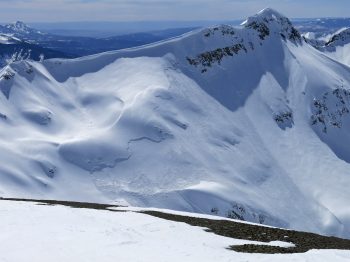 Weather: Still cloudy and cold early with rapidly clearing skies. Temps remained near or below freezing but solar gain got intense. Windloading from the West to the East until 11 am, then it shut right off.

Snowpack: 8-14″ of new snow on average, but winds had loaded/stripped from one place to the next. Couple hand pits showed 10″ new over facets over strong melt freeze or dense old snow depending on aspect. The new slab is up to 4F+ and the facets below 1-1.5mm. No dramatic signs of instability under foot, but the problem is there and easy to find. 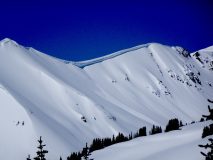 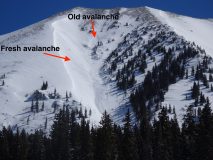 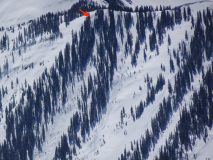 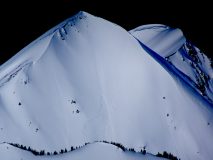 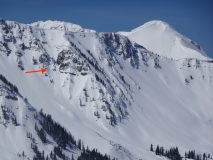 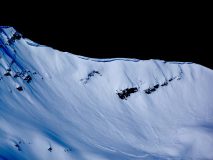 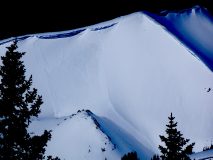 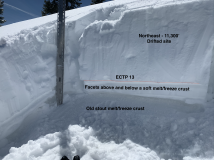 Avalanches: Three Small ones on NE side. More important observation: Four backcontry skiers on three snowmobiles passing me on the Gothic Road on my ski tour to Gothic today. I do not know who they were. And I did not like it.

Weather: Yesterday was generally a nasty day which alternated between strong wind with little snow and periods of moderate snow as the wind died down. Snow went into the night before ending around 9 p.m. Total new was 5″ with water 0.46″. Currently 43½” on the ground under a clear sky. High was 32F yesterday, low 11 and current 13F. Wind is light but gusting a bit. Hey, summer is just 13 months away. billy 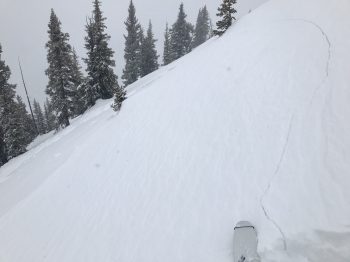 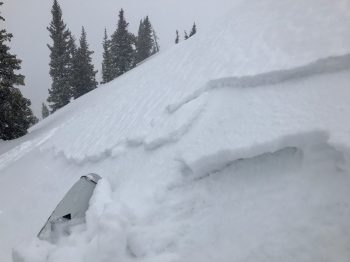 Weather: Cloudy with snow starting around 2 a.m. and going moderately until near 5 a.m. when wind started up. There was 4″ new and water 0.26″ with 41″ on the ground. Currently overcast and mild with the low 25F, high and current 29F. Wind is light but with strong, regular gusting so moving snow around. Loose slides have been running of steep areas on Gothic. The new snow sits on hard crust.