None observed and minimal signs of instability.

Weather: Cold, grey and windy. Overcast all day with fleeting sun spots here and there. East winds in the valley proved to be westerly at higher elevations. Cold, dry snow was still moving around. Some flurries midday did not accumulate to much.

Snowpack: 4-7” of new snow on a mixed bag of firm melt freeze, breakable sun crusts and older faceted snow. New snow seemed to be bonding well, but stiffer windslabs were found on Easterly tilted terrain. Snow is being redistributed by wind and is scoured to old crusts in some areas. 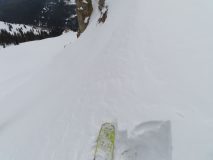 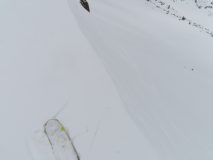 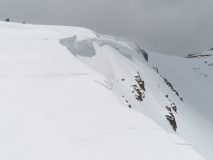 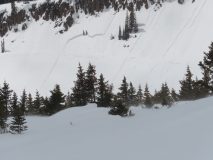 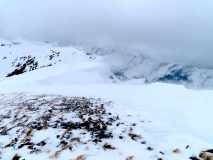 None observed and no signs of instability beyond wind transported snow at higher elevations.

Weather: Mostly sunny with cool temps remaining below freezing. Gusty winds from the west moving a lot of snow at ridgetop.

Snowpack: 5-6” of new snow seemed well bonded to the old crust. Freeze did not seem to go super deep, but snow is supportive. Solar affect become dramatic toward the afternoon with moist to wet snow. Thick new snow with scratchy surfaces underneath. 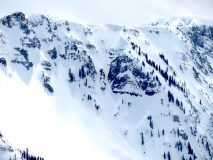 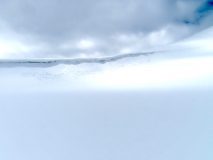 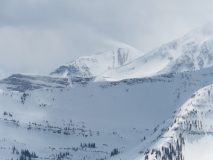 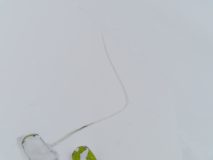 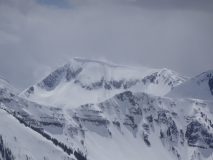 seen from across valley. happened in between laps, must have been around noon.
see photos in email.

Weather: windy as. snownados all over. Could see heavy snow transport on all the ridge and mtn tops.
broken clouds 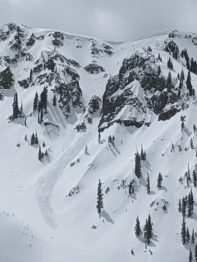 Blue dot is the location of the slide

Avalanches: Possibly one new D1.5 out of 3rd bowl Axtell but marginal visibility prevented confirmation. If it was a fresh slide, it failed as a windslab in this morning’s new snow on leeward SE facing slopes 11,500-12,000. no other reactive slabbiness in new, wind drifted snow in bowl proper or subsequent lower elevation rollers. Maybe early this morning while still cold but radiation and warming has glued new snow and moistened on all aspects and shady areas in terrain traveled.

Snowpack: 6-16″ new snow depending on leeward or windward terrain. The snow seemed to fall right side up and moist, preventing too much transport. Windslabs were growing, but unreactive in terrain traveled midday. New snow was close to rollerball on steeper terrain and may see wet concerns later with more concentrated radiation. Lower elevations became much stickier and wetter than alpine.

Weather: Cloudy and mild with snow starting just after midnight, light to moderate overnight with 5″ new and water 0.35″. Little wind during the night but it has started gusting now with 1-4 W but gusts 10 to 15. Overcast with the temp. range from 26 to 29 and 26F now. Snowpack at 39½” after being at 35½” at sunset. New snow is sitting on a hard crust. Last weeks high temp. average was 50ºF so a delightful week. Finally. billy

Avalanches: none this morning

Weather: few clouds and light breeze maintaining cooler temperatures throughout the elevation bands and all aspects between 745-1130.

Snowpack: snow was very supportive throughout elevation bands and aspects. snow did not corn up when we dropped in to the hanging bowl between Wang Chung and bowls above Green Lake. Snow facing south of ridge line between Green Lake Drainage and the main Axtell cirque was quite soft and the only soft penetratable snow. Snow was edgable in main bowl we skied on all aspects and almost corn on SE aspects. Snow in cirque below main Axtell bowls was firm but edgable. We saw snowmobiles in both drainages and the snow mobiles didn’t create ruts or penetrate the snow surface.

Avalanches:
There I was, standing on a rock with my wife. We heard thunder…. I grabbed my camera phone, then looked to the sky. It was blue.
Then I looked into Redwell Basin and saw a large cornice had just fallen. P