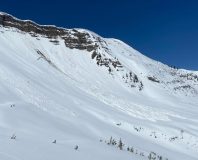 Avalanches: unintentionally triggered r1d1? wet storm slab at the obvious convexity of NW bowl at about 1:30pm, ran with energy, certainly enough to take you for a ride, not quite enough volume to bury. See photo
Weather:
Snowpack: 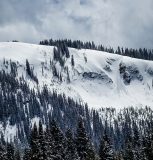 Avalanches: We found sensitive storm slab conditions today at upper elevations. Numerous thin soft slabs released naturally this morning, and we ski cut a handful of similar slabs. All of the slabs were small in size: most were 2″ to 4″ thick, 10 to 20 feet wide. In wind drifted areas, slabs were up to 8″ thick. In sustained steeper terrain, slides ran up to 1500 vertical feet.
Weather: Pulses of moderate to heavy snowfall between periods of quiet weather. Some moderate gusts with wind transport at higher elevations.
Snowpack: About 3″ of new since yesterday.

Weather: Cloudy with light snow overnight with 2″ new and water a light 0.12″ on top of a frozen snowpack. Wind is calm and the snowpack back up to 27″. Currently only a few flakes of snow and clouds look to be thinning with a low of 18ºF after a high yesterday of 38.

Snowpack: Another inch of new snow. Steep due north was still skiing well. A little funk here or there with old crusts. Small skier triggered sluffs in steep terrain. Sticky snow surfaces down low. The previous winds from yesterday and last night made the more alpine features look uninspiring with wind-board or firmer looking snow surfaces. We chose to ski where the snow surface was protected from those winds.

Avalanches: Observed two unreported Wet Slabs on a northwesterly aspect below treeline from the big warm up during the first week of April. Intentionally triggered a couple of Wet Loose avalanches on northeast slopes below treeline D1 to D2 in size. The D2 was able to gouge to the ground, low elevation slope at 9,800′.
Weather: About an inch of new overnight. Partly cloudy skies, mild air temps, and light winds with moderate gusts on alpine ridges.
Snowpack: Largely traveled on northerly slopes near and below treeline. Shaded slopes at 10,000′ appeared to have meltwater drain very near basal depth hoar, but depth hoar was still angular with little evidence of meltwater infiltration (see photo). As we climbed higher near treeline meltwater on a northeast slope had only moved down around 20cm from the surface (see photo). Shaded slopes above 9,600′ feet still have structures to produce Wet Slab avalanches once the meltwater faucet gets turned back on later this spring. Surface refreeze below around 11,000′ was pretty superficial with wet snow grains lingering just below the crust. We descended a short east-facing slope near treeline around 130pm and found quality corn skiing without too much concern for wet avalanche activity. Cloud cover and winds seemed to keep sunny slopes at upper elevations cooler and prevented them from getting too wet. 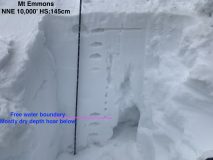 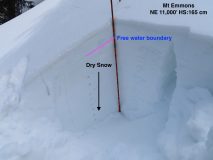 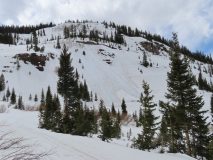 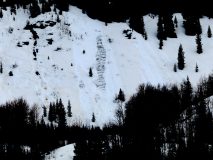 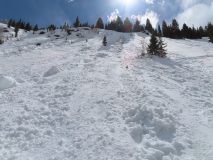 Looking up from the debris pile from largest of the loose wet avalanches. 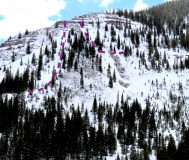 Weather: Few clouds in the morning and increasing in the afternoon. Light winds where we traveled, could see a few small plumes near the Elk Crest mid day.

Snowpack: The steeper north-facing terrain we skied above 10,500ft had a mostly dry old snow surface with about 1.5″ of new snow on top. The new snow was producing small sluffs that were easy to manage. Below 10,500ft on the lower angled slopes, the snow surface became very sticky and wet. The flatter terrain remained supportable to skis around noon. We didn’t get a good sample of low elevation terrain on steeper slope angles, but one small northerly test slope entrained the top 6″ to 8″ of wet snow after a ski cut. 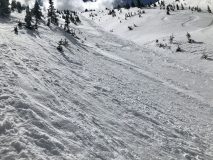 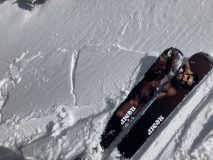 The closest thing we could find to a wind slab: harmless 2″ thick drifts.

Wet snow gouging down about 6″ to 8″ on a small low elevation test slope.