Avalanches: Didn’t observe any avalanche activity in the Upper Slate River. Couple nice periods of light, but otherwise flat light and hard to see. Getting back to town there were a few funny looking things in Red Lady Bowl. At least one small slab low in the bowl and a couple of others potentially on the looker’s left ridge. SE to E. Real bad light and hard to say.

Weather: Little flakes of joy kept falling from the sky. Isn’t that sweet? Sure made me happy!! We headed out at about 10am, fairly consistent S2 until about noon. Snowfall started to taper afternoon and by 1pm it was done with the sky becoming mostly cloudy. Winds were cranking up high with snow plumes throughout the day. Down low the winds were light to moderate.

Snowpack: Snow totals from last night and today were somewhere in the 10 to 14″ (25-35cm) range. While the 1/19 interface was now buried 40 to 50cm down. You were basically skiing in the weak layer, so conditions felt much deeper given all the soft snow on weak snow…

The recent storm snow was rather low density and didn’t have much cohesion yet. Though today’s winds were making the upper 10cm’s feel a bit top-heavy and gave a general thicker feel to the riding conditions. We primarily traveled on NE to E aspects. Down low, the 1/19 interface was well developed 1.5 to 2mm NSF that was very weak. Climbing above about 10,200 feet, and in a completely intact snowpack with no previous avalanche activity, the 1/19 interface was 1mm NSF and slightly harder at 4F-.

The bottom line, the 1/19 interface looks like a bad setup. We didn’t encounter any signs of instability while traveling on slopes in the lower 30-degree range. A few tests highlighted to the potential for storm slabs to break within the storm snow, but that didn’t really matter given the weak interface below that may become more of an issue as the new snow settles into a slab.

Saw lots of other ski tracks traveling on similar slope angles on different terrain features. Great to see folks out having fun and enjoying the new snow. 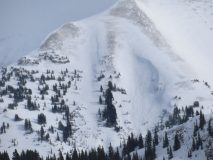 Snow coverage on W-NW side of Gothic. 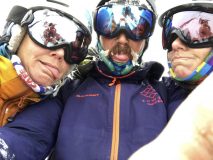 Forgot my phone in the car and found this lovely photo upon return.