Snowpack: We found good stability on steep terrain and noted plenty of weak layers on the snow surface for future problems. Several pits on NE aspects targeting persistent slab concerns were unreactive. In previously wind loaded areas(HS~90 cm), the basal facets show signs of being stronger, harder, and smaller grained now, and were also discontinous due to talus on the ground. In previously wind-scoured or shallow areas areas, the snowpack is quite weak (Fist hard, 1mm facets) but no slab. Snow surfaces consist of widespread .5mm near surface facets on northerly aspects, occasionally capped by a thin wind crust that produced clean shears and cracking. On southerly aspects, the surface is melt-freeze crusts of varying hardness with small grained facets above and/or below. It is hard to find a slope where there isn’t a PWL on the surface, except for the ones that have melted out to dirt. No signs of instability today on slopes up to 40 degrees. 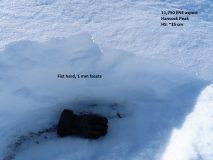 An example from a slope where the snowpack is shallow (due to previous wind erosion), and subsequently, very weak, but not currently a problem because it lacks a slab. 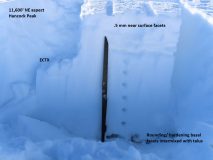 An example of a slope harboring old October snow and a slab above it, but the layer is unreactive in tests 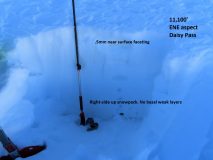 An example of a windloaded slope where there is a slab, but no weak layer below it: just a stable snowpack.

Subject: Groundhog’s day can be fun

Snowpack: Continuing the hunt for persistent slab feedback and not finding it. Went to a high, northerly bowl that we documented in early November as a potential problem slope with continuous weak layer coverage across the whole bowl. The 11/14 northwest wind event had clearly scoured back most of the slab, evidenced by reverse cornicing on the ridge, some veg poking out mid-bowl, and pole probing. A representative pit photo is attached, showing a shallow snowpack without the structure for a persistent slab. There were a few small lobes of potentially crossloaded slabs in the bowl that we easily avoided. We rode in steep terrain with no signs of instability.
In general, the snowpack here is weathering the decaying process much better than what I observed recently at Coney’s and Snodgrass: previous wind events and/or a deeper warmer snowpack is maintaining a supportive midpack so far. Near surface faceting is still occurring at all elevations. No surface hoar observed here.

Quick pit on a suspect aspect showing a lack of persistent slab structure. 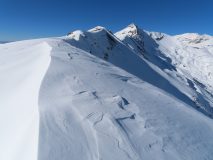 Snowpack: HS 90-95cm on shaded NE slopes; upper 20cm unconsolidated new snow sitting on a soft crust. HS much lower (did not measure, but maybe 20cm) on sunny SW slopes; but compacted and supportable with 8-10cm soft sun on the surface. 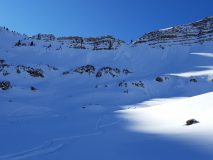 Weather: Another beautiful weather day. Light winds at ridgeline and high temps felt like they reached into the upper 20’s to near freezing.

Snowpack: It’s sad to see the cold clear nights faceting away the upper snowpack. The mid-pack still had good support for now, and the combination of the weak upper snowpack and stronger mid-pack is keeping the skiing good. Unfortunately we are watching or snowpack go its typical Continental direction.

Focusing on the now, and not what we’re going to be dealing with later. Normal caution feels spot on. Or, good group travel techniques, while keeping an open eye out for something isolated that doesn’t look or feel right. It’s getting hard to call a specific or particular increased hazard to manage, but rather the standard general awareness and normal caution seem most appropriate.

There were several old sluffs in the terrain, and fresh skier triggered sluffs in steep terrain. These were to small to pose much of a hazard, but highlight the weakening snowpack all the way up to upper elevations. 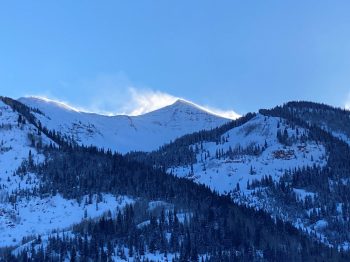 The hills have turned white as we usher in another winter season in the Crested Butte area. Check out the first Weekly Summary of the season to keep track of the early season snowpack, weather and avalanches.

Weather: Clouds decreased to partly cloudy during the mid-day, then started increasing to mostly cloudy again in the afternoon. Mild temps. Clam winds down low. Moderate wind at ridgeline with periods of snow saltation close to the ground. No plumes off the high peaks. Up to an inch of new snow today baby! Keeping it soft, better than nothing.

Snowpack: Traveled in this same area a couple of days ago. Not much change. The old wind-drifts at ridgeline were hard and didn’t give any signs to instability. Today’s new snow had formed some soft few inch drifts right near ridgeline.

Backcountry riders continue to step out and ride more and more terrain features. With conditions going mostly quiet I suspect we will see few observations come in.

Location: Poverty Gulch – around easterly side of Mineral Point

Subject: Bit of this bit of that

Several small (D1) wind slabs observed on east and northeast above treeline slopes. One below ridge top, others mid feature on small inset portions of the feature.

Weather: Cold temps at valley bottom gave way to warm, pleasant. conditions on sunny terrain features. Light winds near and below treeline; some blowing snow and loading above treeline on to southeasterly slopes.

Snowpack: Sunny slopes had several inches of moist snow resting on supportive crusts. The snow on warm features wetted to old crust and refroze to old surface once the sun left the terrain below treeline.

East facing slopes remain dry below and near treeline in this area. Evidence of some wind redistribution near treeline, but really no hazard from Wind Slabs in areas traveled. We were able to produce some minor cracking on the most suspect drifts, but nothing more.

Stomped around on several small drifts behind tree fences on northerly terrain and got one localized collapse on an obvious wind whale but it didn’t produce any cracks. Probing showed weak faceted snow at the ground, but outside the wind whale there just wasn’t much of a slab. 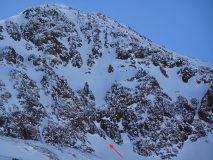 Small slab avalanche on northeast side of Augusta, 11/25. 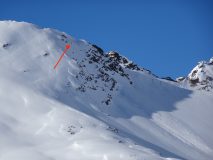 Wind Slab on northeast aspect near Purple Mountain. Debris does not show much sign of wind effect. 11/25 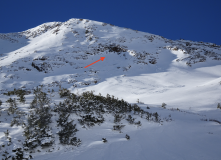 Small slab on east side of Mineral Point. Debris blown over. 11/25

Avalanches: Maybe 20’ish small avalanches at upper elevations, mostly releasing from wind-loading, but a couple coming out of rock bands. A few from today, others were slightly older. Mostly sluffs, or maybe small cornice chucks coming down. Few small crowns. There could have been more crowns that were either too small to see, or had blown back over. These avalanches were observed on west,  north and east aspects, with easterly having the most activity.

Snowpack: North 11-12,000ft: Skied a couple different laps and a couple different skin tracks. HS was generally in the 60 to 80cm range. We traveled on new snow over old wind-board, to a general 70cm snowpack over a thin layer of dry facets, and through many transitions from the supportive slab into shallow a less supportive snowpack. All and all the snowpack was mostly quiet outside of a couple of small collapses. Those collapses didn’t seem to collapse big parts of the slope. The layer of facets at the ground is fairly thin and maybe there was too much ground roughness.

Easterly 11-12,000ft: Great riding conditions on east with the new snow over a supportive snowpack. Tilt a little SE and the snow-surface was becoming moist. We climbed into the start-zone of an easterly bowl right below a ridge. Sections of the bowl were stripped of the new snow by NW winds. Other sections had more of a cross-loading pattern. We moved through a few thick cross-loaded drifts on 35-degree slopes. Those drifts were thick and not giving us any feedback to instability.

All and all, we found good stability and some lovely turns.

Also noticed several ski tracks of folks skiing some large bowls on the northerly side of Baldy, and on both easterly and northeasterly bowls off Purple Ridge. Looked like some folks got some good turns. 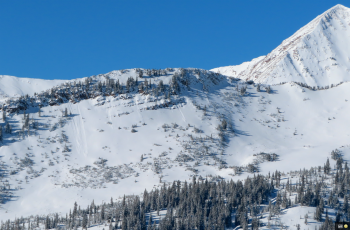 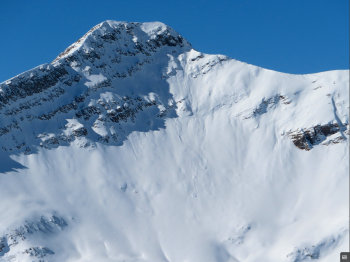 The Easterly face of Purple Mountain had the most activity. Several small slabs and sluffs. 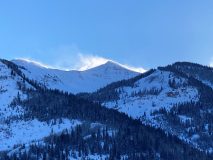 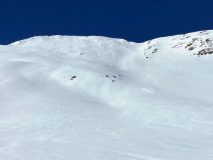 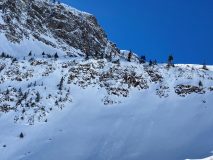 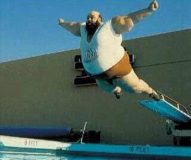