Avalanches: A few small loose snow avalanches coming out of steep terrain. Noticed a couple on east BTL, and a couple on south NTL.

Snowpack: New snow since 1/19 was at about 6″ at 11,000ft. No current avalanche problems were encountered and the new snow really was improving the riding quietly.

The 1/19 crust on the S to SE aspects sure looked like a bad interface for the incoming snow. Those crusts looked like they would hold a little weight, then aid in propagation as they collapsed into the extremely weak facets directly below them. On 35-degree slope angles, the SE crust was 1 to 2cm’s thick, and the S crust was 2 to 3cm’s thick. The 1.5-2mm facets below those crusts were extremely weak and lacking any cohesion. Interestingly, we didn’t notice the crusts gain much thickness or strength from lower angled slopes to steeper slopes. It all just looked really bad. A few photos attached but no way to really illustrate the particular set up well in a photo, you had to feel it…

We were hoping to ski some north-facing slopes too, on the other side of the ridge. Unfortunately, those lines had been completely blown out by the past extreme wind event. Looked like rocks or a very thin snowpack getting hidden under the recent new snow. Hard to say how low you would have to go to get below the blown-out areas. The snow that had been blown out from the northerly facing slopes didn’t do much of any loading on the south side of the ridge during last weeks extreme wind event.

Feels like early December all over again. Basically, everything that was white on 1/19, is now a really weak interface and will start producing avalanches when it’s loaded. Unfortunately, there was good snow coverage on 1/19… 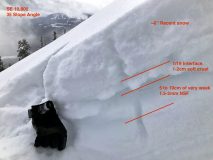 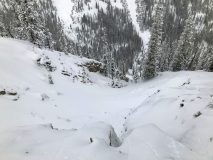 Blown out north. Rocks/thin snowpack below the recent snow 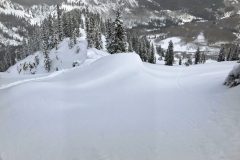 Hiding under the recent snow is blown out north on the left, and not much of any loading from that event on south facing slopes to the right of this photo. 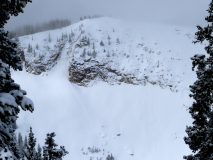 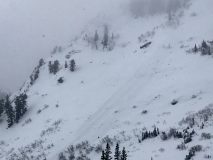