Snowpack: Went for a quick tour around the Antracites looking at north and easterly slopes checking on snow surfaces and the loose snow avalanche problem. On a northeast-facing slope at 10,700 we found 70cm deep snowpack (a bit more than 2 feet) with 20cm (8 inches) of fist hard, weak snow at the surface and 1 finger snow below that.  2 inches below surface a Surface Hoar layer was identified and had faceted grains chained to it (see photo). Any loose snow avalanches in this type of snowpack would remain small and generally not much of a problem. On a north-facing slope at 11,200′ weak snow was around 20cm thick at the surface but looking through a magnifying lens the faceting was much more subdued with far fewer sharp angles. Again 1 finger snowpack below that was very supportive to skis. Descended east-facing terrain from 11,200 feet with a snow depth of 60cm (2 feet) and found noticeably weaker snow at the surface. Faceted grains were larger and well-formed with Surface Hoar layer mixed in a few inches below surface sitting on a 1 finger hard snow below. East-facing slopes continued to weaken on the descent down to 10,000 feet. The take-home point from this tour was east slopes seem to have weaker, and more developed facets near the surface than similar north slopes. 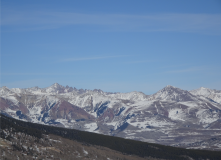 Looking northeast into the heart of the Elk Mountains. Castle Peak on left and Teocalli on the right. Sure looks dry. 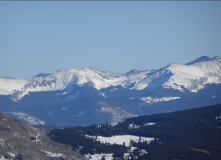 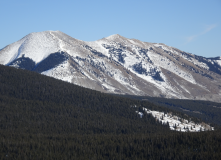