Avalanches: 1 intentionally ski-triggered wind slab avalanche on heavily loaded east-facing test slope above treeline. The crown ranged from 6-24 inches. The larger part of the crown (2 ft) was the trigger point. This was the most windloaded area on the slope. The crown pulled back about a foot above the skier but the skier was able to easily ski out of it because the slope was small.  A couple of other small slabs in the area that released in the past 12 hours or so from wind effect.

15-20 small loose wet avalanches on sunny near and above treeline terrain. The near treeline elevation band had a more widespread avalanche cycle due to continued winds and cloud cover above treeline helping keep surfaces cooler and denser.
Weather: Few to scattered skies throughout the morning. Clouds cleared around 3pm as the solar intensity increased. Moderate northwest winds with strong gusts.
Snowpack: Recent storm snow consisted of about 10-12 inches earlier in the day. This new storm snow rapidly settled to about 8 inches on E and W aspects as the snow moistened.  Numerous rollerballs and pinwheels observed.  The snow stayed dry on steep north aspects.

Above treeline, NW and W winds continued to deposit snow onto leeward ridgelines. In the alpine, we chose to stick to terrain that had not previously avalanched during the February cycles. Very small wind slab pockets were our only signs of instability on alpine N-facing terrain. 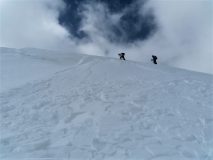 Intentionally skier triggered wind slab on a test feature. The slab broke above me while I was stomping on it and I skied out with the debris 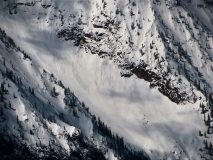 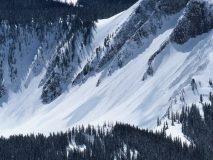 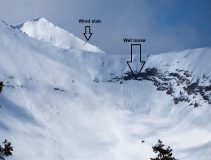 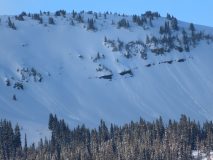