Avalanches: One unobserved avalanche off Elkton Knob in a very drifted southwest feature at 11,000′. A relatively small feature but the avalanche failed at the ground with a crown over 4 feet. Hardslab blocks ran further than I would have expected on this feature knocking down a 12′ tree with a 3″ trunk. Given snow refill on top of some tall blocks, I estimate this ran around 13th or 14th. Skiing through the debris blocks would be a challenging and dangerous task.
Weather: Clear skies, with light winds, and mild temperatures. Sunny slopes at 11K were moist by the early afternoon. The only observed snow transport was on Purple Ridge with winds blowing up a north-facing alpine slope drifting onto southerly slopes.
Snowpack: Dug a profile in below treeline west-facing terrain for GMT descent route (see photo). No propagating test results in ECT even when hammering on the column after standard test but PST failed prior to 50% of cut length. These slopes have around 130-150cm snow depth with slabs around a meter thick caping weak layers from early in the season. No signs of instability underfoot, but we moved thoughtfully through the terrain given the dangerous potential size of avalanches. Sunny slopes were moist by the afternoon below and near treeline, and shaded slopes have lightly faceted surfaces which made for fast and fun skiing. Unreported natural avalanche from a week ago. Southwesterly aspect of Elkton Knob on drifted feature at 11K. Debris is largely composed of hardslab blocks 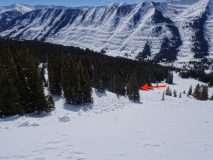 Extent of debris runs to the tip of arrow. Ran further than you would expect. 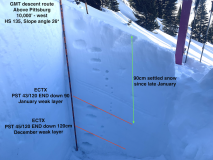 Profile from a below treeline westerly slope. Dense slab capping weak layers from early in the season. Stubborn to trigger, but high consequence avalanche if you did.