Snowpack: Traveled on west to northwest facing slopes below treeline. With some extra effort and a few heavy bounces, we were repeatably able to produce collapses and some long-running shooting cracks. These results were primarily failing on the early December facets. Those cracks ran into slope angels that reached up to about 35 degrees and sometimes displaced a couple of inches. A steeper or unsupported slope may have been necessary for an avalanche to release. We didn’t have the confidence to climb higher in the terrain since lower angle or low consequence route options were not closely available.

Looking at near treeline terrain. The avalanche problem appeared to be slightly more specific to the cross-loaded or gullied portions of the terrain. The same characteristics extended above treeline, but appeared even more isolated in the terrain due to more wind-scoured snow. 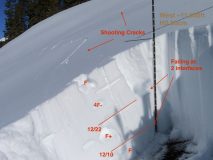 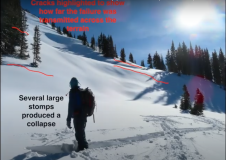 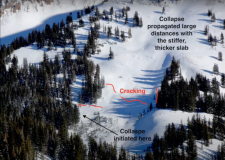 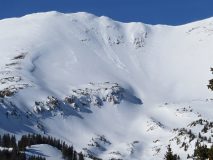 Another view of a reported remotely triggered avalanche on a south easterly aspect of Mt Baldy. 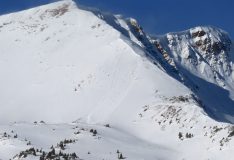 Another view of a reported skier triggered avalanche on a southerly-facing slope of Mt Baldy.