Check out the CBAC Forecasters Blog… 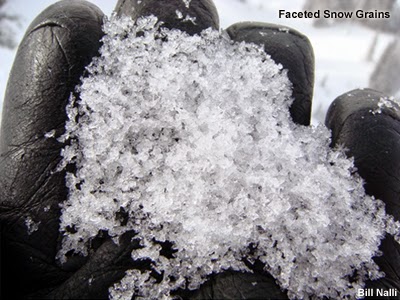 By Zach Guy
CBAC Forecaster
If you’ve been reading our avalanche advisories lately, you’ve probably noticed we’ve been talking a lot about facets.  Last weekend, major winter storm slammed into our mountains, and we saw widespread avalanche activity, with facets being one of the major culprits.  So what is the deal with this snow grain type, how does it form, and why is it so problematic?
Facets are a sugary-like snow grain.  They glisten in the sun, bounce in your glove, and commonly make a noticeably soft or hollow layer in the snowpack.  If you look at them under a magnifying glass, they have many flat edges, hence the name facets.
There are several different ways that can cause snow grains to facet, but they all share the same underlying physical process.  Facetsform when water vapor moves quickly through the snowpack. Each particle gets handed off between grains, via sublimation and deposition, causing the grains to reconfigure into a more angular form.  Strong temperature differences within the snowpack cause this water vapor relay.  We can see facets form early season when the ground is quite warm, there is a shallow snowpack, and the air gets cold, especially at night.  This drives the water vapor upward through the snowpack causing it to facet, or rot out.  We also see a similar process occurring on top of the snowpack, called “near surface faceting.”  When we get warm days and cold, clear nights, the snow surface undergoes wild temperature swings, causing the same rapid water vapor movement. This process is expedited if the surface is composed of soft, low density snow, rather than stiff, hard, compacted snow.  All of these ingredients have come together this winter.  We have seen basal facets form during the early season when our snowpack was shallow.  Then, on December 1st, we got about 4″ of new, low density snow, which was followed by two weeks of warm days and cold, clear nights.  That surface snow metamorphosed into fragile, sugary grains, and we didn’t get strong winds that can sometimes destroy that layer as it is forming.  On December 13th, that near surface facet layer was buried, and it is now under the weight of all the new snow that has fallen in the past 2 weeks.
Facets form a type of layer in the snow coined as a “persistent weak layer.”  So once a layer of facets gets buried by a slab of new or windblown snow, it makes for a weakness in the snowpack on which avalanches can fail.  Worst of all, the weakness is long-lasting, so we can see avalanches fail on facet layers weeks or months after they are buried.  This means that we can see very large slabs of snow develop over the course of the winter before a facet layer might finally give out, causing a huge avalanche.  Facets have a few other nasty tricks up their sleeves.  If the layer is fairly continuous, it is so fragile that it can drive a failure very long distances across avalanche terrain.  I’ve seen avalanches fail almost a mile wide on facet layers!!  If you can get the layer to collapse on flat terrain, it can propagate up a slope and cause an avalanche to release above you.  So not only do these layers plague us for long periods of time, but they also behave in an unusual manner.  Keep this in mind in upcoming weeks and months, now that we have several facet layers buried in our snowpack.   For more information or to get daily avalanche advisories, visit www.cbavalanchecenter.org.

Compare models = toggle between each model

dProg/dt = see the trend in the forecasts
Forecast Models: CAIC

Access to European model graphics and many other models. Fantastic data. $185/year

By now, you’ve probably noticed the CBAC has had a bit of a make-over.  We have spent over a year designing, researching, redesigning, and coding our new website, which we launched this week.   We were operating on an old dinosaur of a web platform and it was time for a new site that matched the current state of the e-world.  This new site has improved graphics, higher resolution imagery, more user friendly from our end and yours, an improved observations platform, a format that is more consistent with avalanche centers nation-wide, and some additional forecasting tools which you can use to make safer decisions in the backcountry.  Bear with us as we work through the kinks and strive to improve the functionality of the site.

Now let’s jump into a key element of our daily forecasts: the avalanche problem.  The reason we put a lot of focus on avalanche problems is because the flavor of the avalanches we expect to encounter can be more influential in our terrain and risk management than a given danger rating.  For example, not all Moderat danger ratings are created equal.  I move through terrain and make snowpack assessments very differently for a Moderate danger when the only concern is wind slabs, versus a moderate danger involving deep persistent slabs.  The Utah Avalanche Center just published a new tutorial on avalanche problems; its worth a look.  http://utahavalanchecenter.org/avalanche-problems-tutorial.  The CAIC also defines each problem here


This idea of avalanche problems is nothing new to our CBAC users, but we’re presenting it in a slightly different way. The four key elements to the avalanche problem is the avalanche character, its distribution, its likelihood, and its size.  Here’s an example of how we present the problem. You can always click on the little blue “information” icons for more help or info.

The trickiest part of this is the distribution rose: where the problem is located across our terrain.  Imagine a conical shaped peak, and you are hovering above it in your private helicopter.  The inner-most rung is the highest elevation: above treeline, and the outer-most rung is the base of the cone below treeline.  Each triangular octet represents a compass direction, so imagine this conical peak is oriented the same way it would look on a map. Now here’s the important part.  We shade the areas where the problem is most likely.  The problem distribution is never as black and white as it appears on this rose.  This gives you general guidance on where you are most likely to encounter the problem at the regional level, but it is still up to you to make assessments on individual slopes.  Here’s an example: We get a mild snow event with strong westerly winds. Our advisory will probably shade the distribution of fresh wind slabs on leeward aspects (NE, E, SE) near and above treeline because windslabs will be fairly widespread on those slopes.  Given such an event, I can almost always find wind slabs on windward aspects (due West) too, if I seek out cross-loaded features or gullies.  There might be a few slopes below treeline that develop wind slabs as well.  So just because the wind slabs are prevalent on higher elevation, leeward aspects, it doesn’t mean you shut off your snow senses if you’re traveling elsewhere.  We will try to describe these nuances and subtleties in our text, so its in your best interest to read the whole advisory and not just look at the pretty pictures.

The likelihood is fairly self explanatory.  This is the chance of triggering a slide if you are recreating in steep, avalanche terrain in the parts of the rose that we have shaded, where the problem is most prevalent.  Lastly, we describe the expected size.  Small avalanches are D1’s: relatively harmless to people unless they push you into a terrain trap. Large avalanches are D2’s: they could bury, injure or kill a person. Very large avalanches are D3’s: these could bury cars, destroy a house, or break trees. Historic avalanches are nearing the maximum size a slope can produce. These don’t happen every year.

We’d like to acknowledge Brandon Clifford, our website designer, and the CAIC for contributing resources and forecasting elements.  We hope you find our new website useful in planning and making safe decisions in the backcountry.