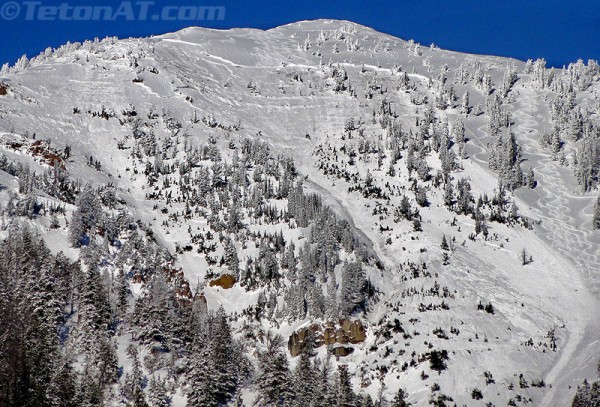 By Zach Guy – CBAC Director
Backcountry recreation is a rapidly growing industry in the West, and equally rampant in our little valley. As the mountain regions around the U.S. becoming increasingly busy during the winter, there have also been an increase in close calls and conflicts between user groups pertaining to avalanche safety.
Several years ago, on an easily accessible peak near Teton Pass, a backcountry skier triggered a huge slab avalanche, upwards of 8 feet deep.  The slide ran thousands of feet, plowing along a drainage that is a popular access and egress point for relatively safe tree skiing.  Debris piles were monstrous, and the resulting public outcry was equally monstrous.  You can read more about the Taylor Mountain slide here. Similar issues have arisen in the Wasatch, some of the passes around Colorado, and more.  As the backcountry becomes more crowded, our need for responsible etiquette increases.  In most cases, it is to protect our fellow backcountry enthusiasts.  But in some cases, we are jeopardizing the safety of the general public who is unknowingly walking or driving their car beneath the avalanche path that you are skiing or riding.
At the CBAC, we have been hearing feedback that our community needs a reminder about backcountry etiquette.  Even our small town has issues with over-crowding in the backcountry.  Observers have noted multiple instances where groups of skiers descended upon another group climbing the same avalanche path.  I’ve always been impressed with the attitude and etiquette of backcountry users in this community. We share observations of snowpack and avalanches, we look out for each other’s interests while on slope, and we don’t seem to hold the territorial or secretive attitudes that many ski towns around the U.S. have.  That’s one reason why I’ve chosen to live here.  Lets not lose that consideration for our community in the backcountry as more people migrate to this great backcountry destination.

So what does backcountry etiquette mean?  Simply put, be aware of your actions and their consequences in the backcountry, because they don’t solely affect you.  If you trigger an avalanche, will it affect someone down slope of you?  Communicate with people you encounter on your tours; discuss your routes and how you can avoid crossing above or below each other.  A few days ago, I found myself on top of the Anthracites on a powder day with over a dozen powder-starved locals eager to drop in.  All of the groups did a great job of communicating and divying up the terrain so that we didn’t all get bunched up on one avalanche path.  If you see a group climbing up your intended descent route, wait for them or choose another route. Its simply not worth putting them in the line of fire.  Cornice drops and ski cuts can be a great slope test, but are you absolutely sure that no one will be affected below you? Think about the size and possible extent of an avalanche that you could trigger.  Under some conditions, a slide on Red Lady Bowl or above Peanut Lake Road or on Snodgrass could run across roadways of innocent commuters.  And just as importantly, if you get injured or killed in a slide, the impacts reach far beyond just you. You have family members, friends, and community members that will be deeply impacted.

Winter is just underway here in the Crested Butte area as our shallow and weak snowpack is starting to get buried.  We will undoubtedly see dangerous avalanche conditions developing once we see some big storms.  Lets kick winter off right. Consider your safety and the safety of others by bringing an improved sense of backcountry etiquette to the Elk Mountains.