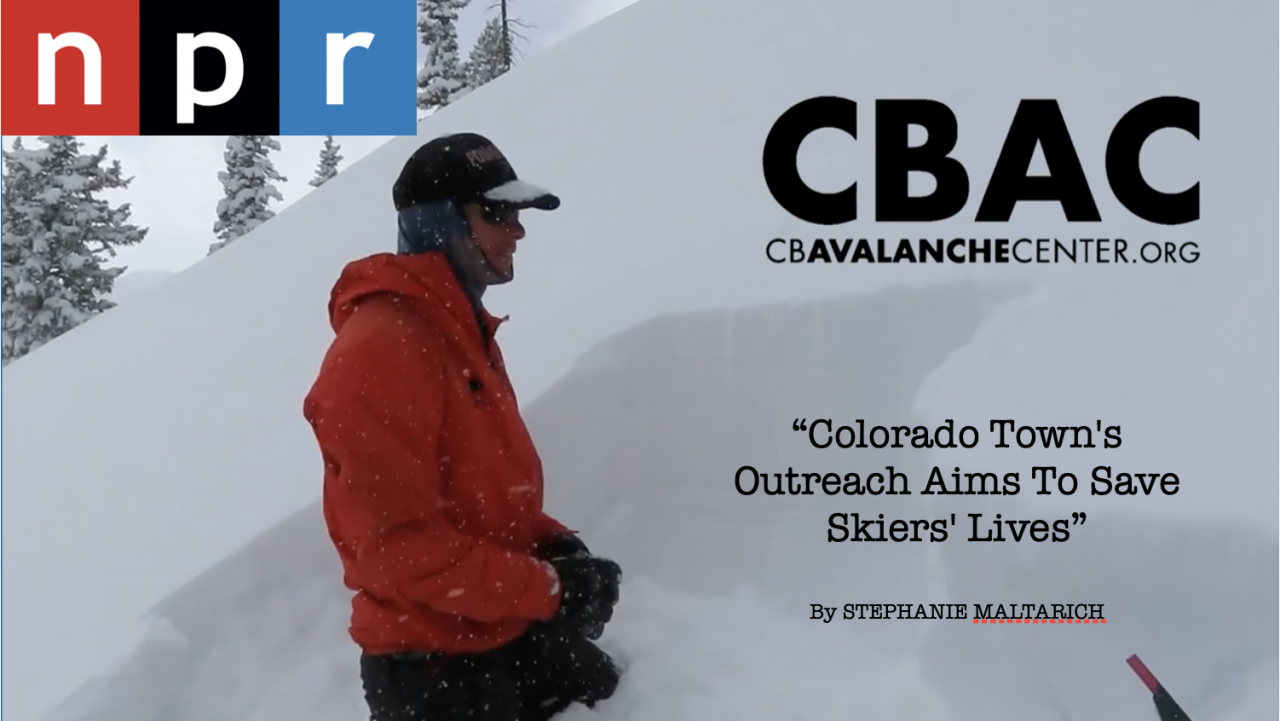 🎧 Headphone up and enjoy this National Public Radio coverage of the Crested Butte Avalanche Center’s new Outreach program!! Thanks for your generous support of the program. We couldn’t do it without you! Enjoy the sweet sounds of all of your hard work...🎧

As the story points out, the funding for this avalanche education and outreach program is only temporary, so please hit the button below to help us continue to sustain and grow the program!

Today’s NPR story was actually the second story covering our work this week! In case you missed it, check out the Colorado Sun article on our work linked below: 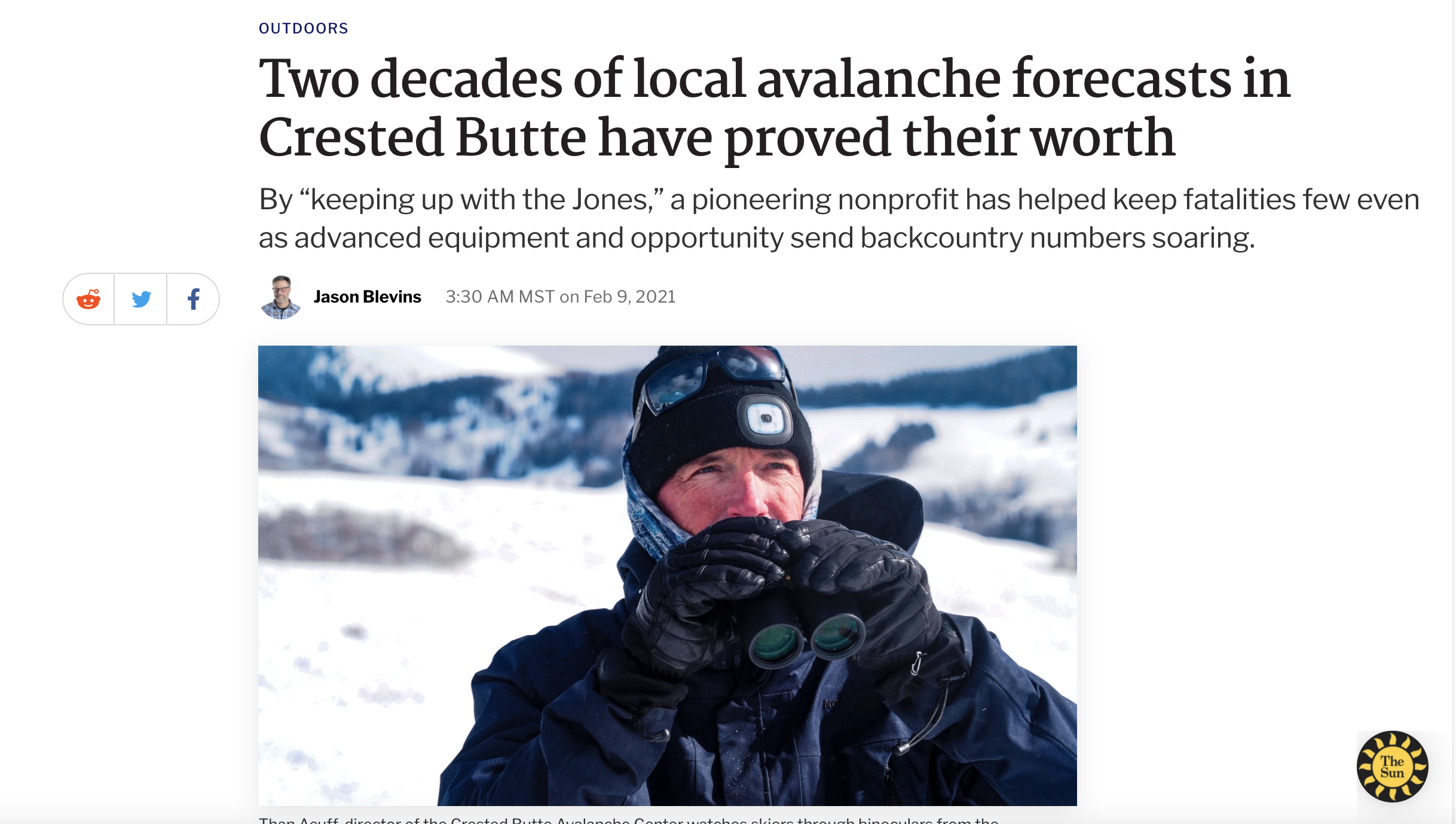 Thank you for helping us in our 20-year mission of helping Gunnison County residents and visitors enjoy our mountains and come home safely to friends and family. 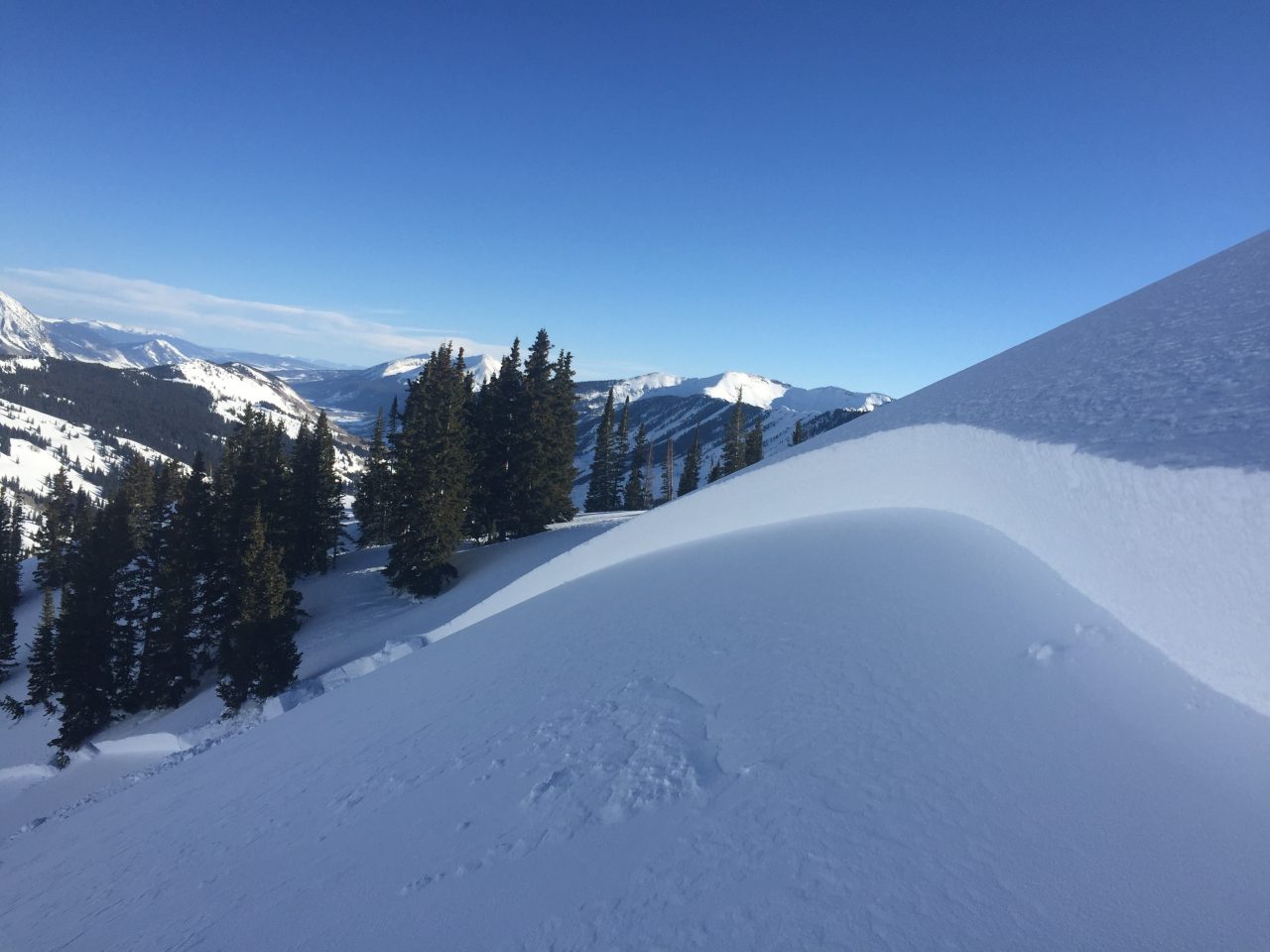 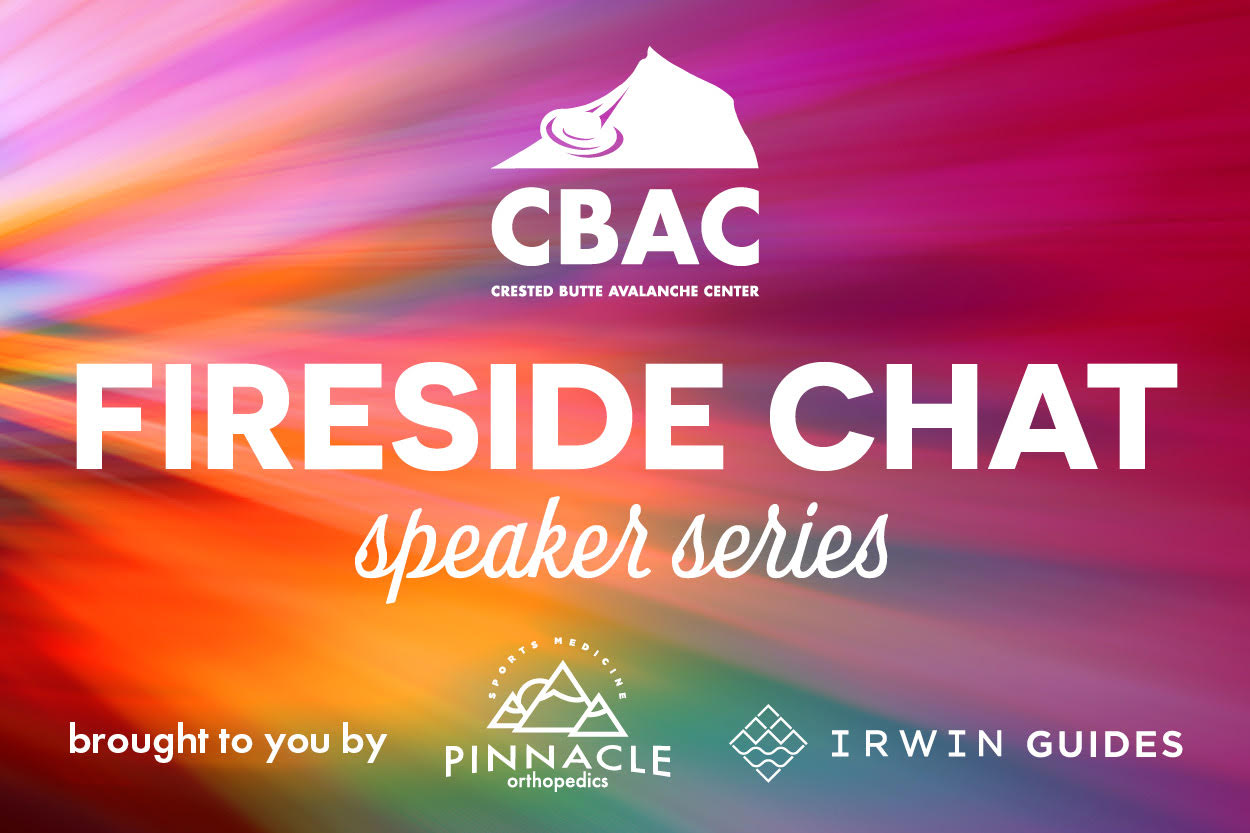 Jan 7th- Dragons in the snow with Craig Gordon and Ed Power.

Jan 21st- Drew Hardesty, On the nature of forecasting… And why we get it wrong. 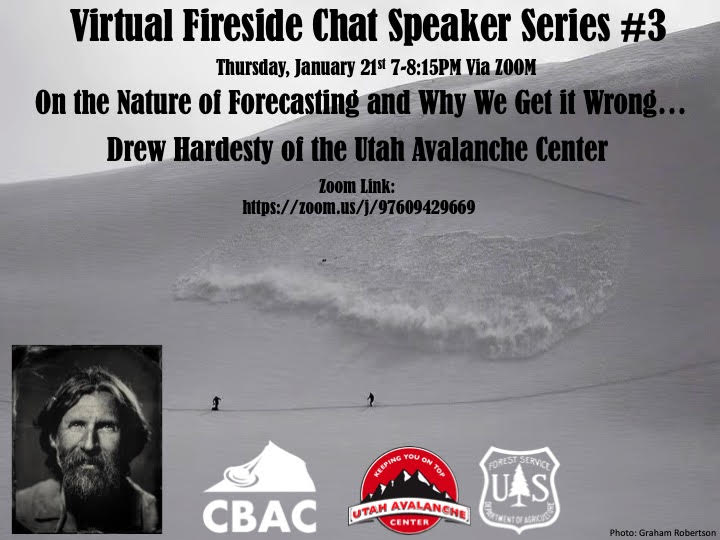 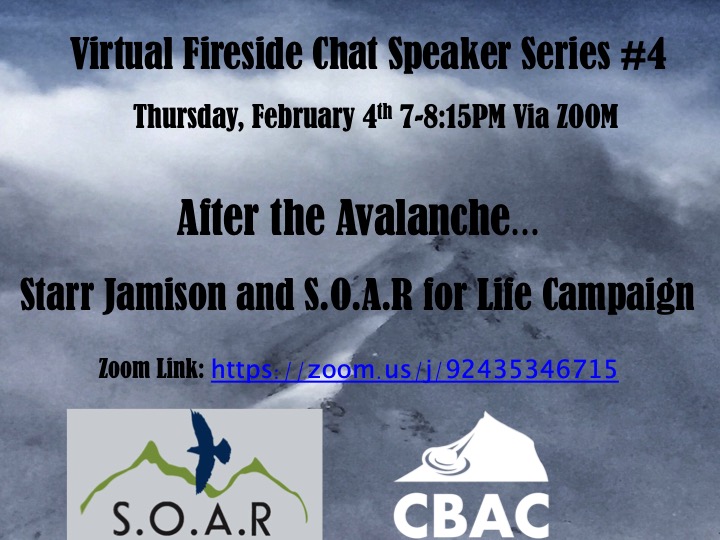 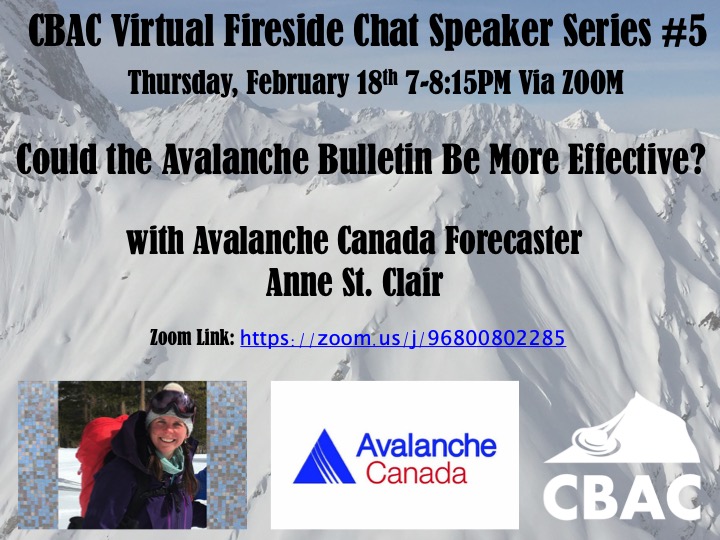 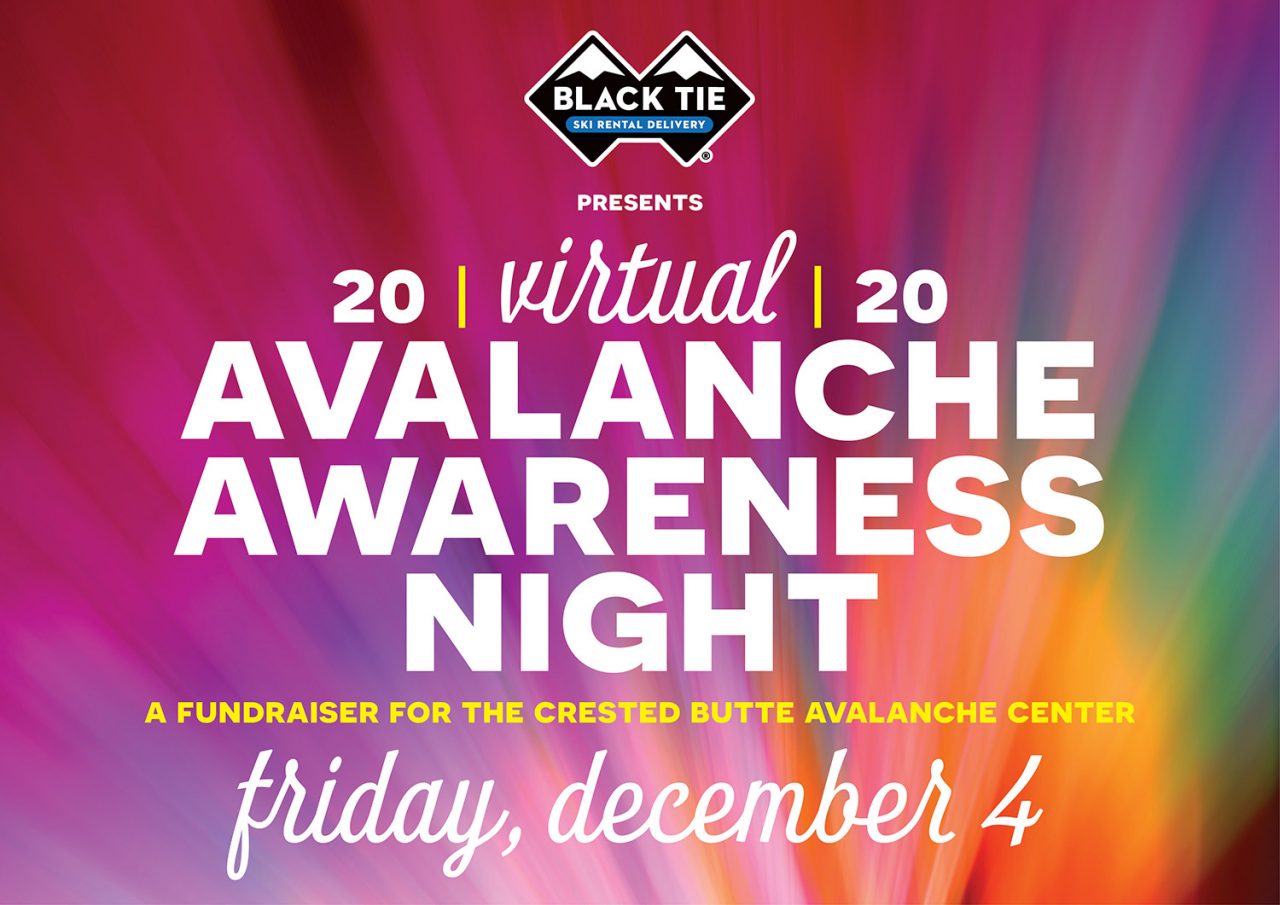 Donate all-day December 4 until 7:15 pm and be entered to win:

Prizes will be bundled, so you win more!

Like everything this year, our Annual Avalanche Awareness Night will look a little different... but we'd like to think it might be even better! Join us Friday, December 4 via our YouTube LIVE channel at 6 pm. Everyone's favorite MC, Than Acuff, will host an unforgettable evening with presentations. crazy giveaways (with a donation)  and interactive Q & A with amazing forecasters. Think 70's gameshow style entertainment with the classic CBAC shenanigans that you've grown to love!

Make a Donation ABOVE to enter to win HUGE prizes.  ONE NIGHT ONLY.

YouTube
**PLEASE NOTE** We are holding TWO different giveaway drawings - Early Bird from November 20 - December 3 and Night of December 4 ONLY. In order to be eligible for both, you have to enter both! 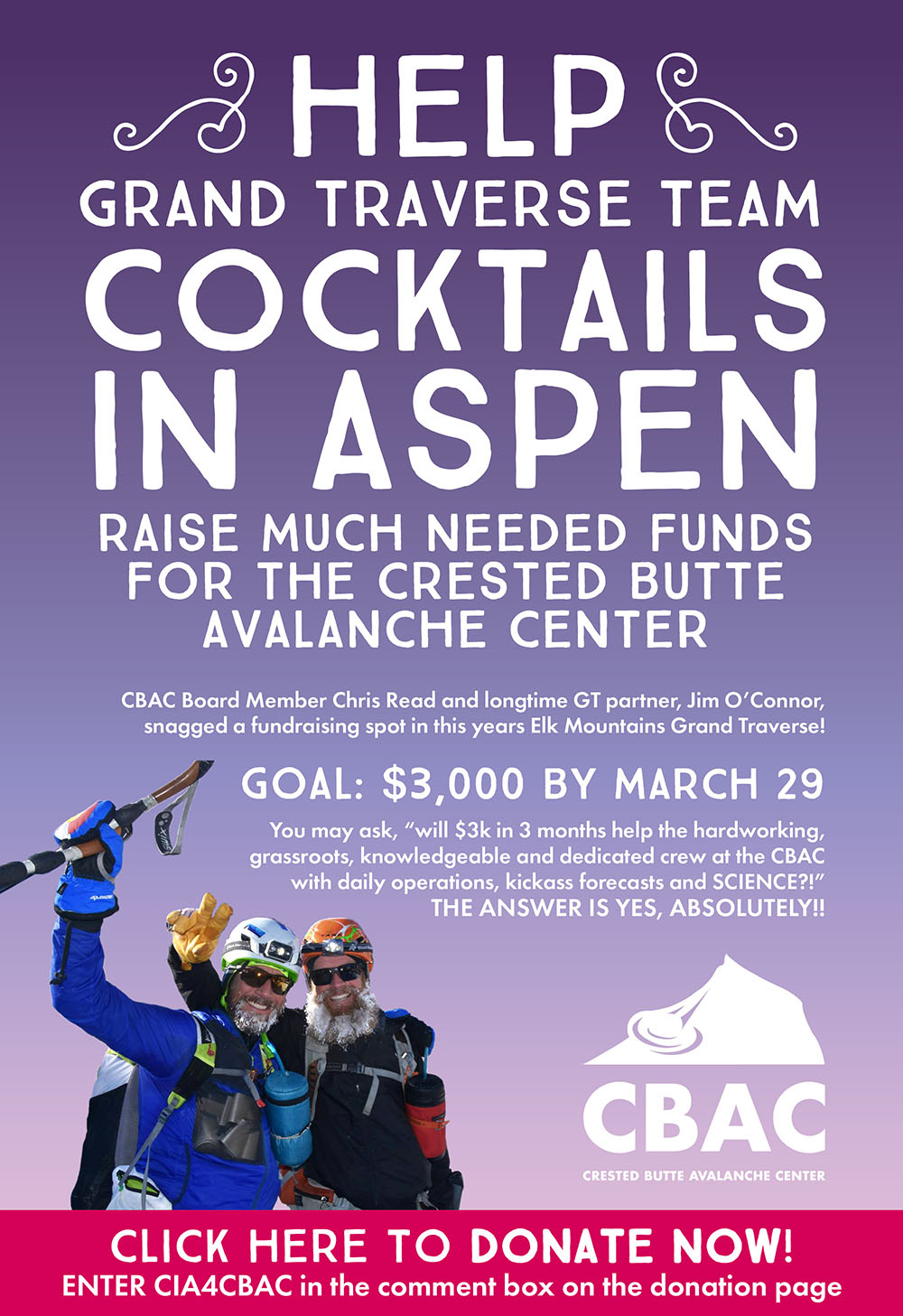 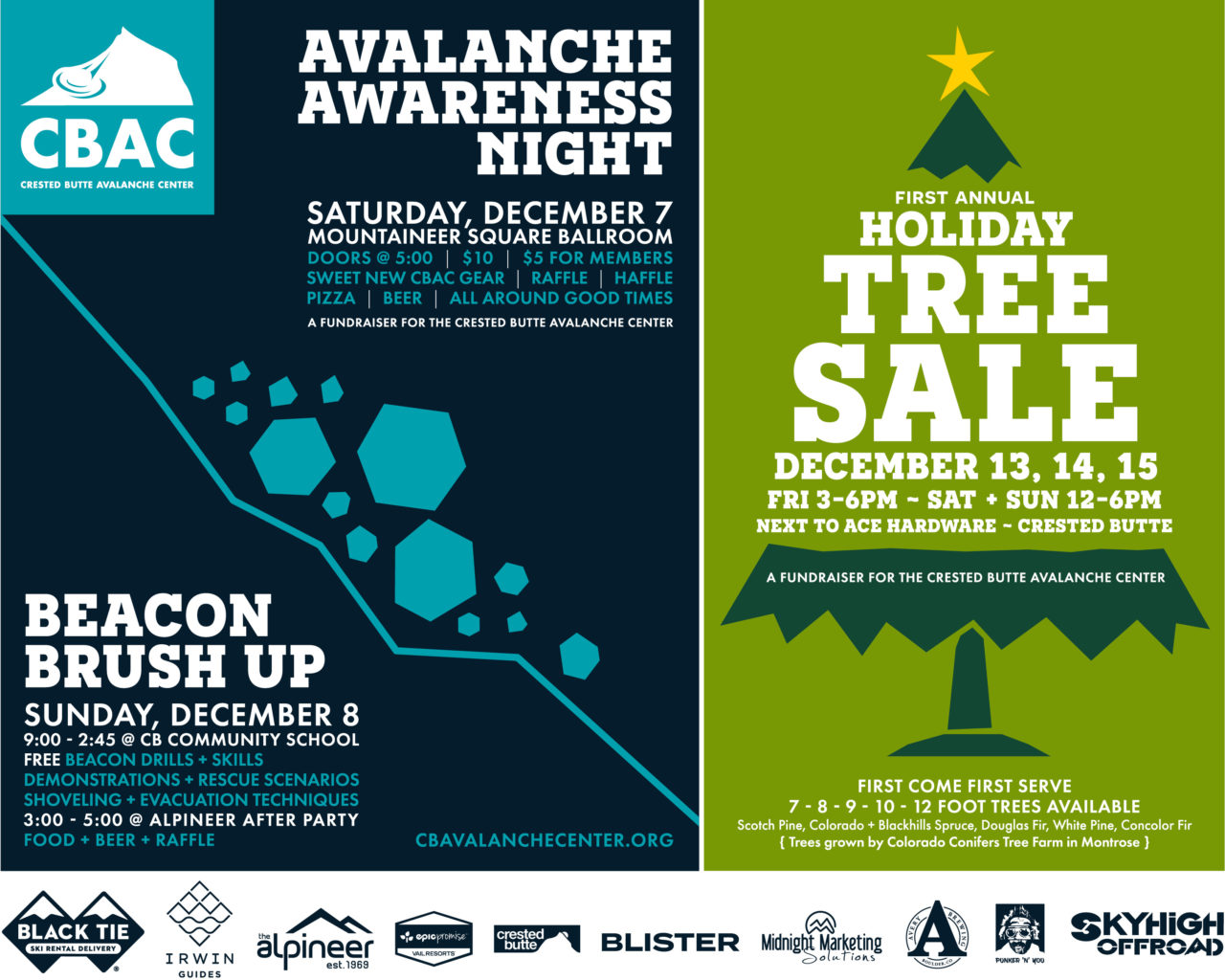 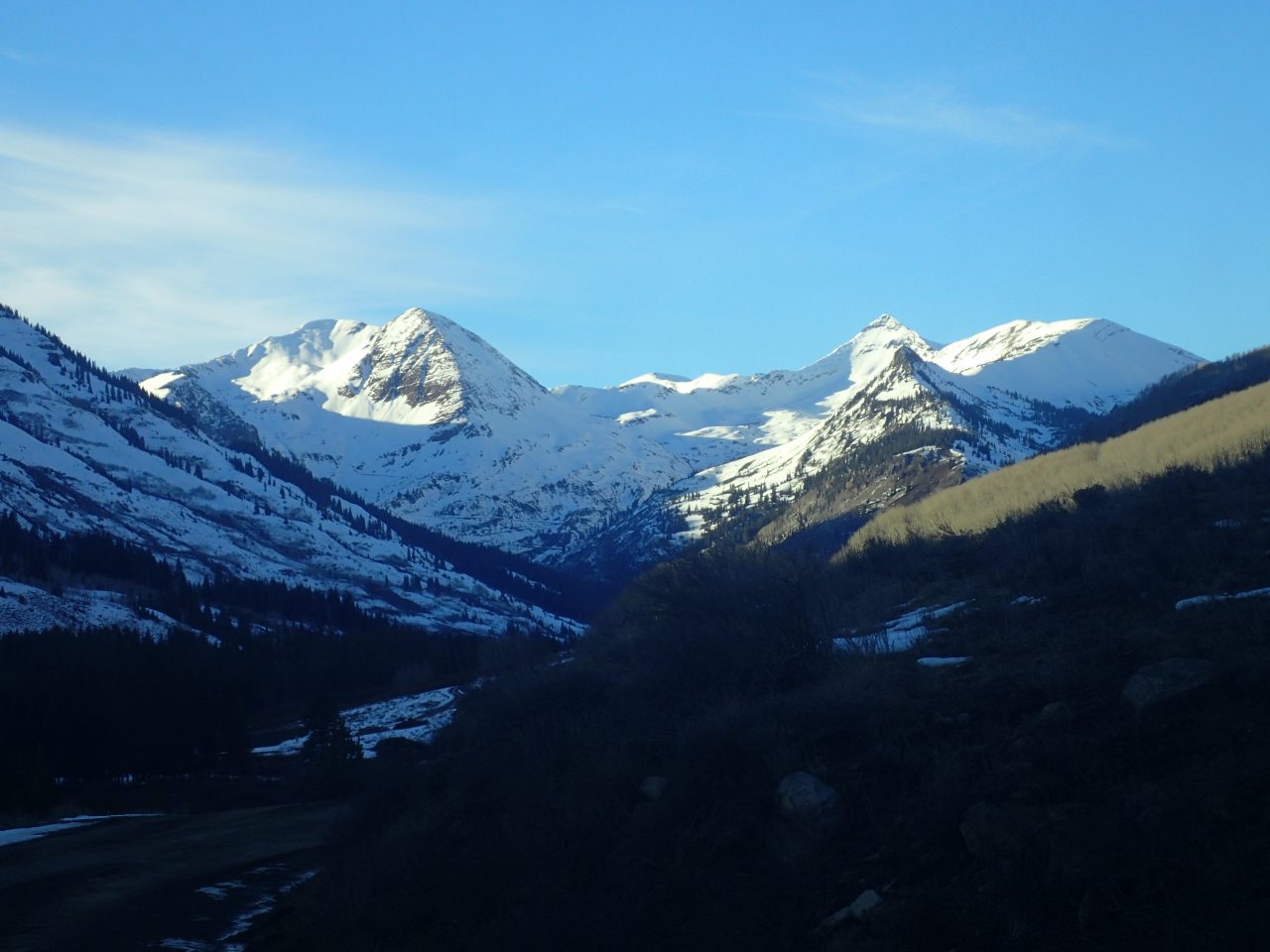 Another weak wave of moisture has passed over the Crested Butte area leaving us with a dusting of fresh snow and not much of an increase in our avalanche danger. As a cold front chases this storm out we could see winds whip the new snow into very shallow wind slabs on Northeast through Southeast leeward slopes, though these are likely to be thin and less hazardous.
Our early season snowpack has been weakening through the faceting process promoted by our warm and sunny days followed by clear and cold nights. This has allowed the current avalanche danger to diminish with signs of instability tapering off. The sun has created some crusts out there, and the temperature swings have created a thin layer of facets on top of this crust. All of this points toward more dangerous avalanche problems once we do receive more snow.
For now, there are still some lingering areas to be heads up in. North through Northeast slopes, above treeline (where the snow is the deepest and therefore the riding will be the best), are still holding onto strong over weak layering and slab type conditions. These slabs are pretty tired right now and have reached a point where they are unlikely to be triggered, however it is still possible and we should still be prepared.
Continue to carry and know how to use all appropriate avalanche rescue tools. Bust out your probe to check for snow depths along your journey and feel what the snow layers are like. When you detect strong over weak layering, get out your shovel and do some tests to see how reactive that slab might be. Shadier leeward slopes steeper than 35 degrees where previous snow has drifted in and where the snow transitions from deeper to shallower will be the most suspect area to be aware of.
Looking ahead, the forecast models are showing another storm headed our way on Thanksgiving and perhaps a more prolonged stormy period after that. If you are out in the backcountry this week, take note of the current snow cover and structure and think what it will be like if/when we do receive another foot of snow or more.
The CBAC will begin daily forecast operations on Thanksgiving Day. Please continue to send us your backcountry observations! 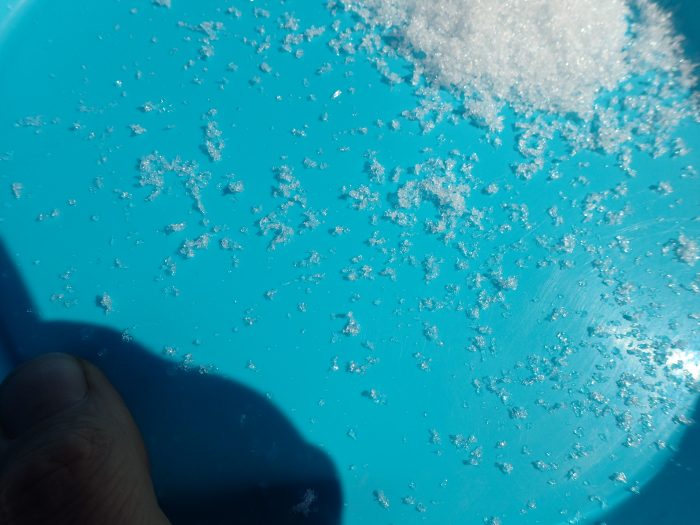 1-2 mm facets found near treeline on a SW aspect 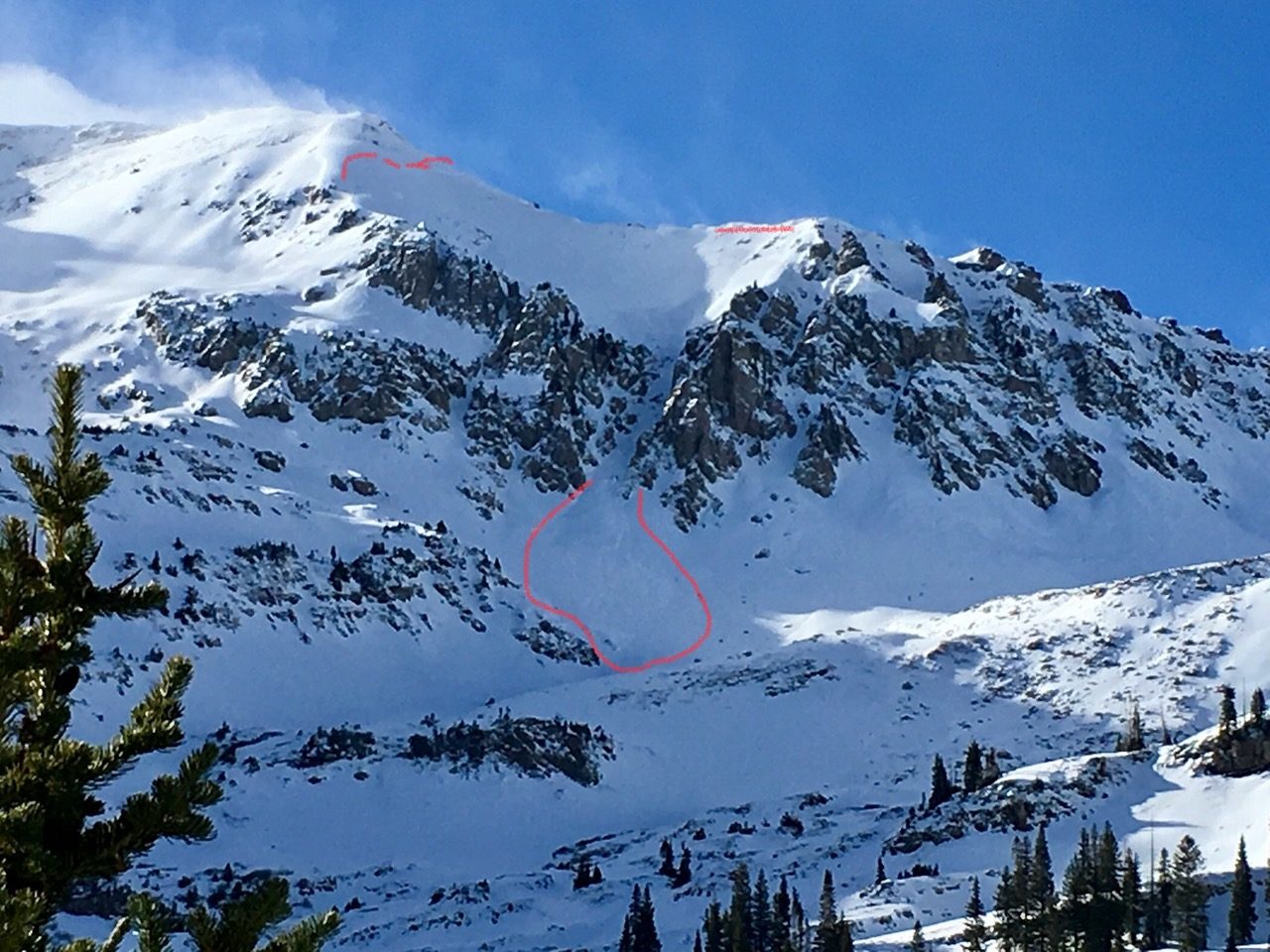 Last weekend (November 3, 4, 5) we saw periods of heavy snowfall and large early season accumulations throughout the valley. The higher peaks and more favored mountains near Paradise Divide, the Ruby Range and even in the Anthracites received up to a meter of new snow in more drifted terrain. This brought a cycle of natural avalanche activity, especially on North through North East slopes where previous faceted snow from October provided a weak support structure for the new snow. Avalanches were reported on Mt. Baldy, Richmond Mountain and in Redwell Basin.
As the storm cleared on Monday and into Tuesday, significant winds continued to transport snow and likely contributed to another natural avalanche cycle earlier this week. The valley’s newest weather station on top of Cinnamon Mountain showed sustained winds in the 25-30 mph range and gusts reaching 50 mph from the North-East. These winds are great for moving snow onto leeward slopes and creating slab avalanches.
The middle and end of the week brought colder temperatures with overnight lows even dipping below zero, tapering winds and sunny skies. This rather benign weather pattern looks to continue into next week except for a quick chance for some light snow showers Sunday night. This will easily lull backcountry travelers into a more complacent mindset and draw us toward bolder lines and more dangerous terrain. Wind and storm slabs are morphing into persistent slabs with stiffer snow overlaying shallowly buried facets and weaker snow. These conditions are most likely to persist in areas where our snowpack is a little more robust, and therefore the places that seem to want to be ridden.
If you are heading into the backcountry this weekend you will likely seek out the deepest snow you can find. If the slope angle in these areas exceeds 30 degrees, bust out your shovel and your probe to see what lies below the surface. On the south facing or lower elevation slopes, you may find minimal basel facets and more stable snow. On shadier and higher slopes you will likely find well-developed facets (weaker snow) near the ground and a slab on top indicating more dangerous slopes. And after you do that, send us a note with what you find! You can drop your observations on our facebook page, by email at cbac@crestedbutteavalanchecenter.org or by clicking the observations button on our website, cbavalanchecenter.org.
IMAGE DESCRIPTION: Outline of natural avalanche observed on Richmond Mountain earlier this week 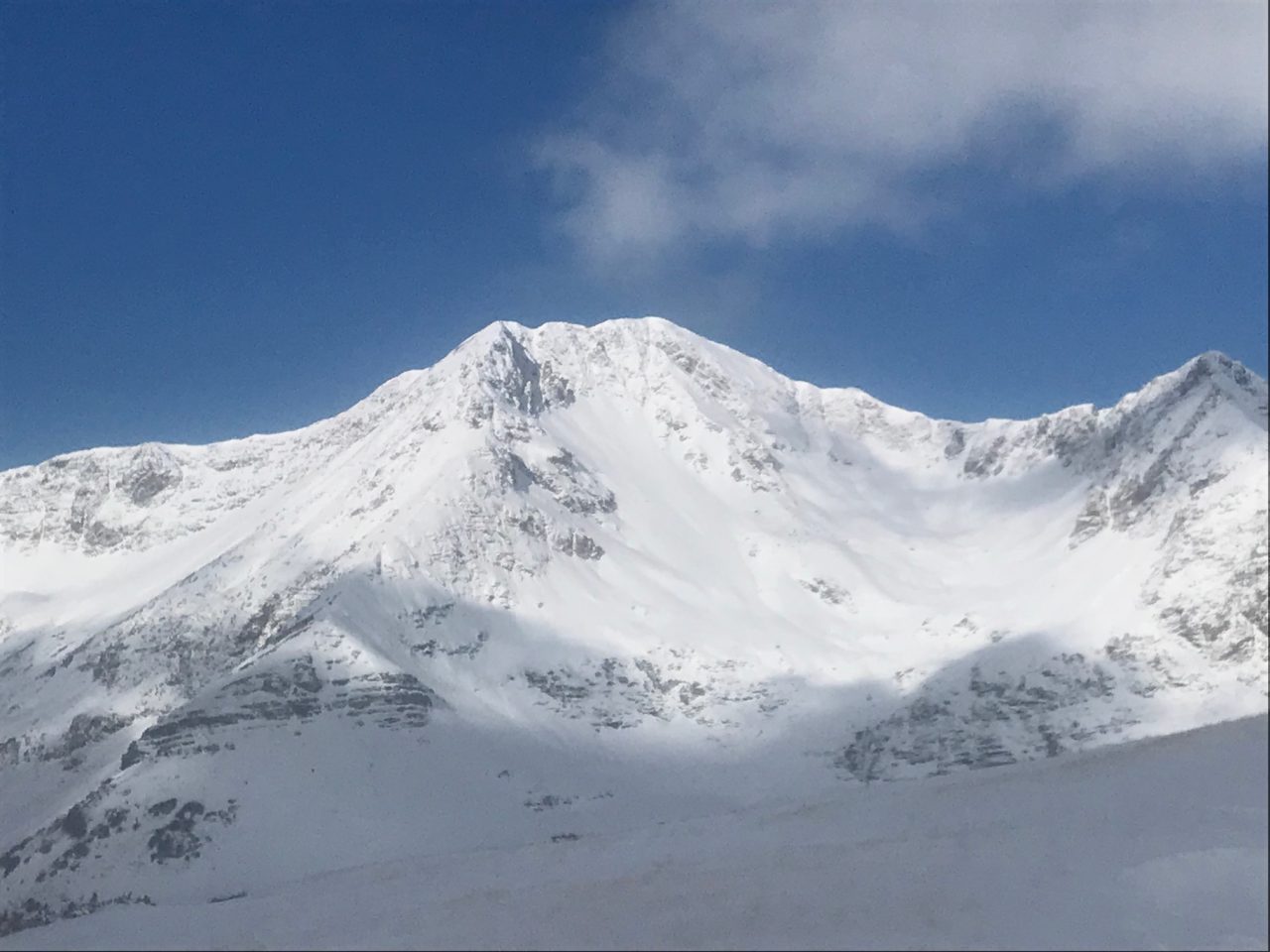 After our first big storm October 10th, we saw drier and warming weather return that melted most snow below 11,000ft on the southerly aspects, but the warmth wasn’t strong or long enough to melt away all the snow on west, north or east facing slopes.  It cooked it into a dense, slick layer that will be problematic for future avalanches, but at the time, kept those skis above the sharp rocks below.
Snow and precipitation returned around October 24th bringing pretty impressive rainfall below 11,000ft and another slushy few inches above treeline.
Now, most recently, we saw about 6” of “rightside up” snowfall on Halloween, starting wet, windy, and falling at around 30 degrees on the 30th, until overnight temperatures fell into the teens, leaving a fluffy finish and some people took advantage of that snow for some turns in the Kebler Pass area.  However, a decent natural slab avalanche (size 1.5) was observed on the NE bowl of Mount Owen, failing within that new/old snow interface and running mid apron.
As the snow piles up, it will become increasingly likely to see avalanche conditions develop on slopes steeper than 30 degrees, on the northern half of the compass where the snowpack is deepest.  That is the conundrum this time of year, looking for the deepest turns also means poking your nose into the most avalanche prone terrain.
As always, mind those sharky early season hazards and tread lightly!  Don’t put a fork in your season before it begins.  Please pass along any early season observations and remember, the Crested Butte area has seen a healthy dose of near misses and close calls with avalanches this time of year in the past.
Look for another update as conditions continue to develop and regular forecasts firing up later this month.
-Ian Havlick 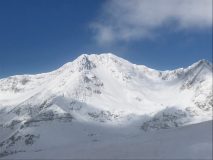 Mount Owen Slab avalanche if you zoom into apron. 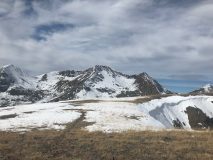 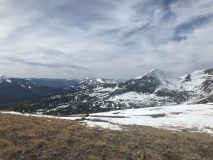 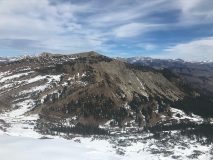 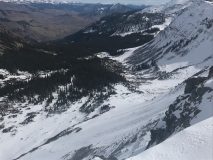 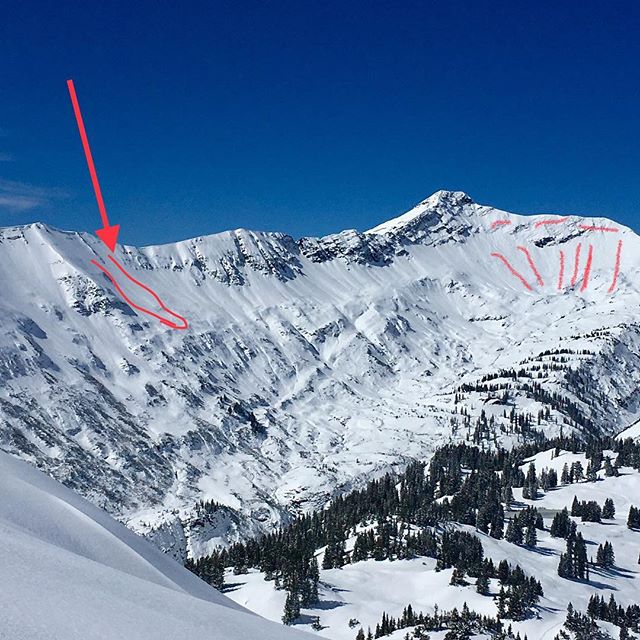 The mountains surrounding Crested Butte received a solid coat of new snow last week. Accumulations ranged from 1 to 2 feet across our forecast area. The spine of the Ruby Range and Paradise Divide areas were the winners in snowfall totals. Westerly winds during this period produced fresh cornices and wind drifts up to 3 feet deep behind ridges and leeward terrain features. CBAC forecasters noted at least one significant (size 2) wind Slab avalanche and several loose snow avalanches over the weekend. This snowfall lured many skiers and riders into the high country for the first turns of the season.

If you head out into the high country looking for early season turns keep a few things in mind.

We will provide periodic condition updates as conditions warrant both here on our website, and on our social media channels (Facebook and Instagram). Look for the CBAC to resume daily forecast advisories sometime during the second half of November. Enjoy that early snowfall and send us your observations!