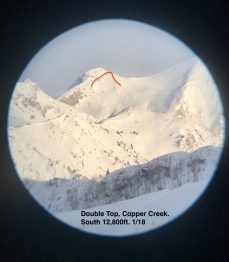 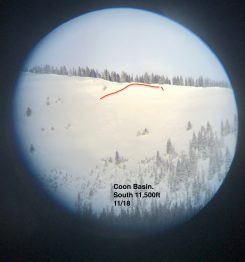 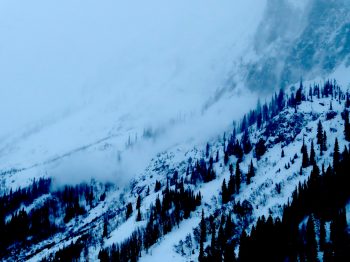 AVALANCHE IN MOTION, STORM SLAB ABOVE CLIFFS TRIGGERED A SMALL PERSISTENT SLAB AND STORM SLAB BELOW. 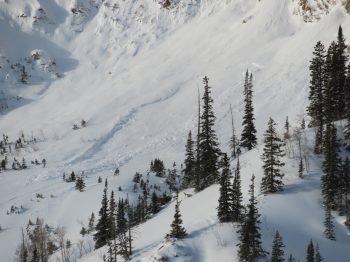 SMALL PERSISTENT SLAB TRIGGERED BY STORM SLAB FROM ABOVE 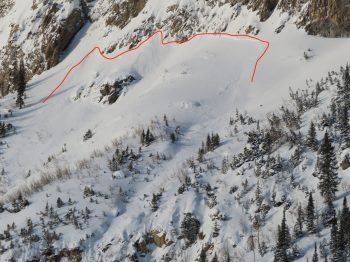 STORM SLAB THAT MAY HAVE BROKEN INTO UPPER SNOWPACK WEAK LAYERS IN A COUPLE AREAS. 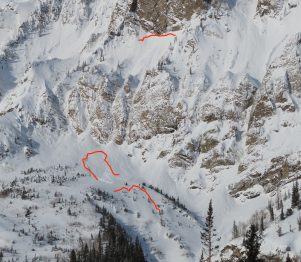 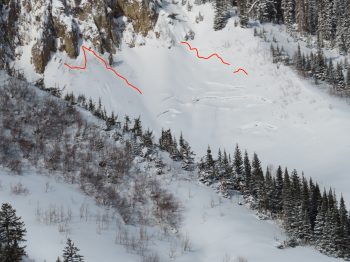 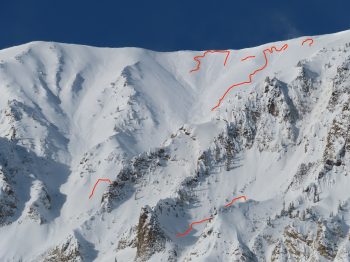 Avalanches: Snowmobile triggered avalanche on an easterly, heavily wind loaded slope. Crown was appx 80-90cm deep and ran on what seemed to be an old surface hoar layer from before Jan 13th storm. Crown was appx 80-90m across and propagated near the top of slope. Slide ran appx 400ft. Slab was consistently dense (wind affected snow) aside from the top 6″ of fresh storm snow. No riders were caught.

Avalanches: Photos did not show well in poor light up so none are attached. Schuylkill: hard to see but thought saw LS-R0.5-D0.5 below riddgeline and a HS-R1-D1.5 in adjacent drainage that began below cornice. I don’t think slide resulted from recent storm.

Weather: Blowing snow on Baldy ridgetop at beginning of tour. Light winds on ridgeline with snow movement. Air temperature dropped on the way out to the road. Skies were obstructed switching to obscured skies with S-1 snowfall.

Snowpack: N instabilities on or off the skin track. Fence line in valley bottom skin track is less than 1 inch from snow surface. About 2 to 4 inches of new snow. New snow filled in skin track but didn’t obscure it completely except in the flats. Qualitatively speaking: new snow has more water content than last Saturday’s storm snow at same site.

Avalanches: Remote triggered one large slab avalanche. Crown depth was around 2′ deep, but we were in lower angled terrain above and couldn’t really see anything other than the crown since the terrain rolled out of sight below. Test slopes were easy to crack. Saw a couple of natural avalanches, but we could not make out how far they propagated in steep terrain because the visibility was too poor.

Snowpack: Dangerous conditions developed by the afternoon. Soft, dense drifts up to 3 feet. The most dangerous snowpack we found was where 2-3 foot deep drifts built on buried melt-freeze crusts on southeasterly terrain near and below treeline (we didn’t get above treeline). Easterly-facing slopes without crusts had more load (3+ feet deep drifts), but seemed less hair-trigger. We observed many slope-wide collapses where drifted snow overloaded thin crusts with facets below, or even just overloading weak faceted layers in the upper snowpack. We measured 2.5″ SWE above a faceted crust on a lightly drifted slope at 11,400′. This 2.5″ SWE is the 2020 snow total and the weakness below was formed in late December. This ~30 degree slope collapsed and cracked but was not quite steep enough to slide. This seemed to be theme for the afternoon as we travelled through 20-25 degree slopes with widespread and obvious signs of instability. We extrapolated that we would have been likely to trigger a large avalanches in more consequential terrain.

A natural avalanche had run a short while before we approached this steep slope. We couldn’t see how far this slide propagated into the steep terrain that lies out of site.

This slope collapsed and we watched cracks shoot out beyond how far we could see. Where the slope rolls-over below a slab avalanche broke and ran out of site. The ~2 foot deep crown is just visible in the center of the image.

Avalanches: Lots of old crowns. There was some freshish looking debris at the bottom of one of the W Gothic shots, but I couldn’t see a crown from where I was.

Weather: When I got in my car, it was -6. By the time I left the TH (7:15a), it had warmed up to -4 and all my fingers hurt. Lenticular clouds hung out above visible peaks, otherwise sky was pretty clear. Thin stratus cloud cover increased as I worked towards Coneys. By the time I was through the meadows and into the trees on the ascent, only my thumbs hurt, so it must’ve been closer to single digits. After I navigated the 3, yes…3 different criss crossing, braiding, winding ascent tracks going up to the ridge (it’s possible I even skinned downhill for a bit, it was confusing, I got lost), it felt closer to double digits because my hands didn’t hurt anymore. When I was back at the car, it had made its way up to 16, so that was nice. Winds were calm the whole time.

Snowpack: Small/med sized surface hoar (3-4mm est) in the classic areas of development in that zone. The open pitches at the bottom of the climb, a couple open spots on the ascent, and along the tree fences on the N side lap track. Recent winds have ravaged alpine and even NTL zones. The W face of Gothic looks like Aetna usually does with the windward features bare and leeward ones packed with snow.

Avalanches: Human Triggered a large Persistent Slab Avalanche on a cross-loaded east facing slope at 10,800ft. The slab average 1.5ft thick, was F to 4F hard, and failed in 1.5 to 2mm NSF on the 1/8 interface. A few parts of the avalanche gouged deeper into the snowpack. AMc-SS-R1-D2-O

Snowpack: Headed to Evan’s Basin to check on recent avalanche activity. I would estimate that many of these slabs ran in the storm snow on non-persistent grains given their size and propagation. Digging near one of those crowns on an east-facing slope, produced a clean shovel shear tests within the recent snow on non-persistent grains. At that test profile site, the elevations was 11,150, east aspect, slope angle was about 34 degrees, and the HS was 120cm. The 1/8 interface consisted of 1mm rounding faceted grains. CT18 RP on the 1/8 interface. The rest of the snowpack in this location wasn’t concerning without a big loading event that could break deeply into that snowpack. 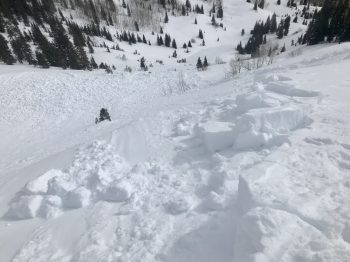 Avalanches: Forgot to take pictures of the bowl – 2 small windslab avalanches near the center and looker’s right rock bands that didn’t run far. Multiple small avalanches NE aspect near the skin track running down into the bowl. 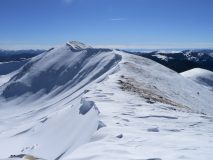 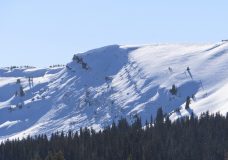 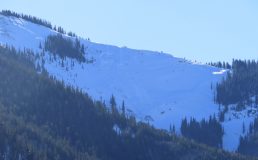 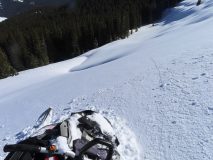 The only slope cut to produce shooting cracks. Failing in the faceted snowpack below the recent wind slab. East, 11,400ft.

The only slope cut to produce shooting cracks. Failing in the faceted snowpack below the recent wind slab. East, 11,400ft. 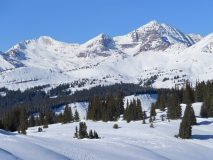 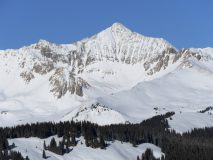 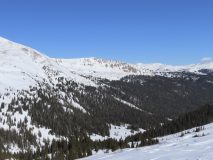 Looking toward the Opa’s Hut in Upper Taylor Park 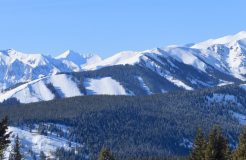 Looking over to Brush Creek 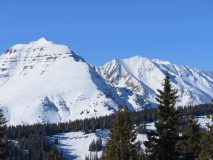 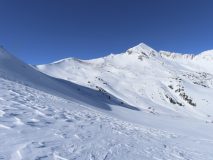 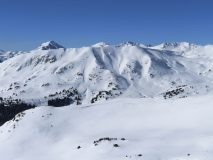 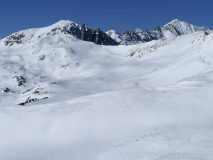 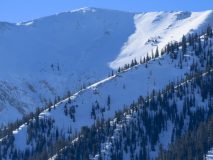 The only slope cut that produced shooting cracks. Failing in the faceted snowpack below the upper wind slab 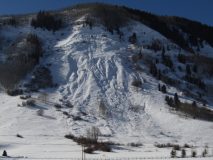 A very soft slab avalanche gouging into an overall weak snowpack near the valley bottom on Gibson’s Ridge.

Avalanches: Couple of fresh wind slabs to D2.5. The spork ran this morning, while the others in the last 12 hours.

Gothic Mountain, The Spork. SE terrain, but the slab pulled from the cross-loaded easterly facing portion of the start zone. This path has run multiple times this winter so it doesn’t have the full seasonal snowpack. Crown estimated to be near a meter deep and releasing around the old snow surface. SS-N-R2-D2.5

Weather: Few Clouds, light wind down low with continued snow plums off the high peaks through the day.

Snowpack: Expected to find some concerns with cross-loading, but in the end, no new slab issues were found. Maybe higher in the terrain, there was something more concerning. At 10,000ft on northeasterly facing slopes, faceted grains were down about 18cm. The new snow wasn’t concerning, above the old snow surface from last week. It simply added to the loose snow avalanche potential or could release as a very soft slab in very steep or unsupported terrain. Deeper new snow accumulations or cross-loading at slightly higher elevations could have created more of a slab concern. If SH was present in this snowpack, it was surrounded by other weak faceted grains and not a layer of concern.

HS was in the 90-120cm range. Old persistent slab structure could still be felt lingering in the snowpack. This structure wasn’t making any noise or showing obvious signs of instability. While the majority of the most concerning terrain features in this area had previously avalanched this season with old crowns still visible. 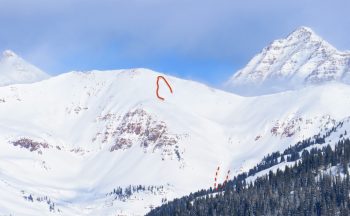 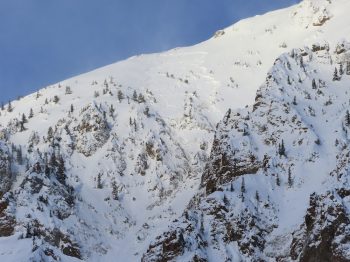 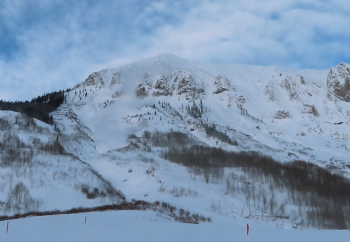 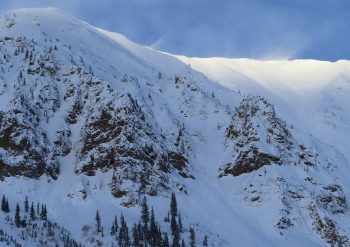