Weather: Cold valley bottoms in the morning gave way to moderate air temps by mid-day at all elevations. Winds were very light even above treeline, very comfortable conditions in the alpine. Thin, high cloud cover all day – filtered sunshine.

Snowpack: Surface Hoar was present on all open slopes on the north half of the compass from valley bottom straight to the top at 12200′.

Below treeline shaded terrain showed a snow height between 60cm and 80cm. Ski penetration ranged from 20cm to 35cm, boot penetration was to the ground. There is just enough strength in the top half of the snowpack for reasonable skinning and marginal riding but generally too weak for much of a slab avalanche problem below treeline.

As soon as we walked above a large drifted slope, we produced a collapse. This collapse failed in the middle of the snowpack on a very weak faceted layer capped with surface hoar. Test results at a nearby location produced CT5 SC & ECTP11 results failing in the middle of the snowpack beneath a slab that has been building over the past month. Slab hardness was up to 1 finger. see photo

Briefly poked into a northwest-facing feature at 12000′ and again found a weak snowpack that struggled to support skis with an HS at 9ocm – riding conditions were trap-door.

Alpine terrain on Cement Mountain was not nearly as wind-blasted as other parts of upper Cement and Brush drainages. 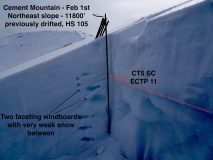 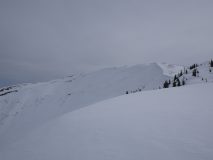 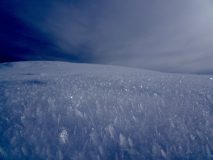 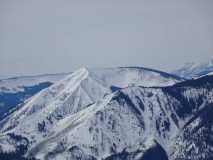 View towards Carbon, and SE end of Whetstone