Snowpack: At 10,400′ HS: 241 cm. Free water was observed ~63 cm from the surface. This is ~38 cm above the 2/28 interface. Continued settlement from warm weather has consolidated the snowpack to nearly knife hard mid pack.

Found an older wet slab on a SE facing slope around 9k. Probably slid the same day as the ones a little further up the valley in the first narrows.

Weather: Partly cloudy this morning with enough solar on E-SE slopes to produce pinwheels in the upper 1″ of fresh snow around 9:30am. 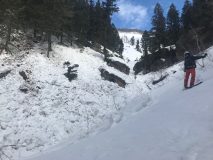 Intentionally skier triggered several wet loose slides on a S aspect of Axtell. D1, entraining only the new snow.
Also, saw evidence of the very large avalanches on W aspects of Whetstone and E aspects of Carbon [from March cycle]. E aspect of Carbon had snapped large aspens ~1/3 mile uphill on the opposite side of the valley. Carbon creek buried under substantial debris.
Will email pics of Carbon and Whetstone slides because they’re cool!

Weather: Broken skies moving to scattered around 1130. Light winds from the W, calm in the valleys.

Snowpack: No signs of instability on W and NW aspects of Whetstone.
New snow was wet on S, SE, E aspects of Axtell, snow beneath MF crust was still dry.
Observed two small collapses on small, isolated slopes, NE aspect of Carbon around 11,500′. These slopes were above and near areas that obviously slid during the March cycle, but were lower angle and had not slid. Skied a NE aspect on Carbon and saw no signs of windslabs on NE or E aspects ATL.

Weather: Overcast skies with heavy snowfall at times, or none at times. Light winds from the West.

Snowpack: New snow up to 4″ quickly consolidating on solar slopes with some radiation. Very supportive snowpack and still soft, good skiing on shady slopes. Southerly slopes had a 2″ crust below the new snow, though bonding seemed to be ok. Below the crust was weaker, faceted snow.
Photos: 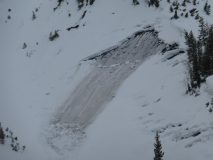 Weather: Cloudy skies with periods of snow, heavy at times. New snow accumulations at 12,000 feet, 1pm was 4 inches. Winds were lighter than expected, under 15mph while in open terrain at 12k. Visibility was limited but hung out for 30 minutes in open ATL terrain and observed almost no transport.

Snowpack: Visibility was too poor to venture into terrain with possible Wind Slab development. Skiing in steep NTL protected terrain produced fast moving shallow sloughs. Sloughs were able to entrain just a small amount of old snow at NTL elevation. Snow surface remained dry on northerly slopes down to about 10,400′ before becoming moist. 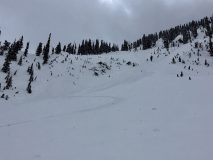 Weather: Partly cloudy skies in the morning with a mix of thin high clouds. Temperatures warmed near the freezing mark up to 11500′. Winds were out of the west blowing light with occasional moderate gusts. Skies increased to mostly cloudy around 2pm with a few flurries.  Snow surfaces warmed more than expected from good solar input in the AM along with the mild temperatures.

Snowpack: Less than an inch of new snow overnight, no accumulations during the day. Snow surfaces became moist at valley bottom and southerlies by 1030am and by 130pm, it was easy to trigger shallow, slow-moving wet loose avalanches on southerly slopes at 11,500 feet. North facing slopes became slightly moist up to around 11,500′. Shaded slopes had around 10 inches of snow resting on the 3/29 interface near treeline.

*Received at a report of a skier triggered wind slab on a south aspect at 12,500′, 8 to 10 inches deep* – this came in the evening via test message, not from Mt. Emmons

Weather: Morning fog and low clouds burned off by mid morning with partly cloudy skies and strong solar following. WNW winds were moderate at times with stronger gusts at ridge top. Temperatures remained in the lower to mid 20s.

Snowpack: Trace to 2″ new snow on supportive MFcr that was 5 to 8cm thick on SE-S aspects above treeline. Winds were moving small amounts of snow onto leeward slopes in the alpine.  Drifting up to 10″ deep was found on SE slopes above treeline immediately below ridge tops and cornices.  Very minor cracking in drifts.  Snow surfaces remained cold on southerlies near and above treeline where temps remained below freezing and cold winds prevented warming. On a quick check of a Cornice triggered slab avalanche in Red Lady Bowl, we found the avalanche failed in a layer ~60 cm from the surface and stepped down another 60 cm or so. Perculation columns were found in the area of the first failure layer.  It is unknown if those were recent and contributed to this avalanche or if they occurred during the warming last week and the avalanche was solely a product of the weight of the cornice overloading dry weak layers.  This slope also had avalanched catastrophically during the early March storm cycle.

A Sprinter van-sized cornice was accidentally triggered when a snowboard was placed in the snowpack during transition at the flags at the top of Red Lady bowl. The cornice triggered an avalanche directly below the drop that propogated about 10-15 meters wide. The avalanche was about 80 cm deep, to the ground, exposing rock and grass. The debris slid to the rollers at the bottom of the bowl. One person’s pack and poles were lost in the debris, but the pack was found on top of the debris at the base of the slide.

Snowpack: Snow conditions ranged from crusty to icy with a thin layer of fluff.