Avalanches: Some small Loose Wet Avalanches in the new snow that accumulated today, Small Loose Dry Avalanches on northerly faceting slopes and some Wind Slabs up to a foot thick there were stubborn and produced few results.

Weather: High clouds had cleared out in the morning, but low convective clouds kept the small storms rolling through the day. Generally light winds, but strong enough on ridge lines to transport snow as the storms rolled through.
Snowpack: Storm totals for the day were around 3 to 4 inches. Managed plenty of terrain for drifted features and the threat of trigging old Wind Slabs at upper elevations. Then as the snow accumulated through the day we continued to manage terrain for new small Wind Slabs. The Wind Slab problem was suborn, and other than avoiding some terrain, we saw few results. Sluffing in the new snow was the other small avalanche problem. Heightened avalanche conditions on specific terrain features felt just right. 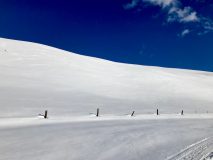 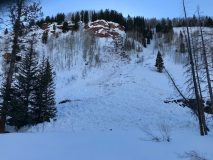 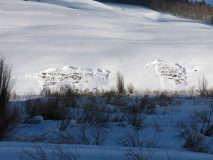 Avalanches: Two separate small Wet Loose skier triggered avalanches at about 11:45am on a small convexity on the slope.
Weather was much warmer and sunnier than expected so this type of avalanche was predicted!
Noticed the snow heating up around 11, and turned around earlier than planned.

Weather: Sunny and Warm. No wind.

Avalanches: Natural Loose Wet Avalanches were small in size, but powerful given their wet nature. These avalanches mainly failed on east to south to west aspects, while the recent storm snow had also become moist on some northerly aspects.

One fresh D2 soft slab had failed below an easterly ridge at 12,000ft. An older D2 Wet Slab was also observed in the Happy Chutes ENE ~9600ft.

Weather: Partly cloudy sky, with plenty of that strong April Sun. Winds were calm to light and 11,000’ish FT weather stations showed high temps in the mid to upper 20’s.
Snowpack: The sun did its thing and cooked down the new snow. North stayed dry, but other slopes all saw the effects of the sun up to the elevation traveled. The deepest drifts where isolated in the terrain and didn’t seem to cover big parts of the slopes. Managing terrain for a windslab avalanche problem around a foot thick was spot on. While a Loose Wet Avalanche problem developed, it was smaller in comparison. 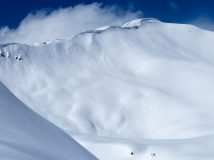 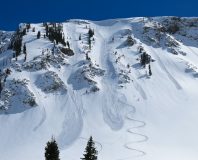 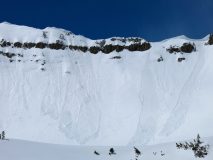 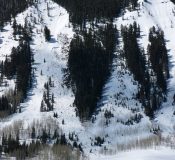 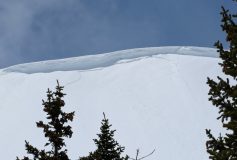 Another sallow soft slab that had failed on an easterly aspect at 11,900ft

Snowpack: 10- 25 cm new snow throughout UWW, EBM and SBM. Upper west wall start zones are holding the least amount of new snow. In round two and strike three we observed shallow storm slabs breaking
10′ in front of skis. These slabs are not running yet. There is a mid storm instability above the MFcr old snow surface. This is most likely the same, dense 3″ of snow at the base of the study plot boards observed this morning. EBM had 30cm of new snow concentrated on the ridge top. SBM had 15-20cm of new that has not slabbed up by mid day.
Photos:

Weather: Overcast skies with light snowfall. Minimal accumulations between 11am and 3pm. Winds were blowing most of the day with strong gusting. Drifting of the new snow was observed even below treeline in open areas. Unfortunately, dust came immediately prior to this round of snow and will likely start to appear during the next melting period.

Snowpack: New snow accumulations ranged from about 2″ to 6″. It was a bit difficult to gauge new snow at upper elevations as the wind scoured, drifted, and pressed the snow in most open terrain. Drifts up to 18″ were observed and likely deeper on some alpine features. Drifted and wind-pressed snow readily cracked and formed a very cohesive slab.

Poked a quick hole on a west aspect at 10,000′ with an HS 155cm and found free water had percolated down to within 45cm of the ground with percolation tubes present to that level. The next warm period will likely see free water drain down to the oldest and weakest snow near the ground at this location and make Wet Slabs a concern.

Localized windslabs just above the bench, 10,200’ or so, skier triggered a small r.5d.5 slab which ran with little energy, 10 inch crown

Weather: Overcast skies with snow ranging from S-1 to S2 from 1pm to 430pm. Winds had already shifted to the NW by 1pm. Wind speeds were generally in the 10’s but some gusting reaching up to 30 at ridgetop at 11,500′. Precip fell as rimed particles and some graupel.

Snowpack: New snow accumulations reached 5″ at 430pm. Just over 2″ fell between 1 and 430pm. Poked around on a variety of aspects at ridgetop looking for fresh drifts with deepest being around 6 or 7″, Very minor cracking, 1 foot, on the driftiest features. All aspects, expect due north above 11,200ish” had a crust at new/old interface. Southerly aspects near treeline had crust 3″ thick underneath the new snow. Steepest terrain features produced minor skier triggered sloughs.
Free water on NE facing slopes had perculated down from 20 to 40cm from the surfaces. Most slopes above 11,000′ regardless of aspect had drained/froze any liquid water by the PM. Upper snowpack below around 11,000′ continued to hold moist snow below a very thin, weak crust from the previous night’s warm temperatures.

Avalanches: Fresh Loose Wet Avalanches were observed at all elevations, but primarily at near and below treeline elevations that faced east to south to west. This avalanche problem was also stretching into NE facing slopes. Many loose wet avalanches stayed small and within the new snow, however some were starting to gouge deeper into the snowpack and become larger in size.

A Large Wet Slab Avalanche was also reported on a ENE aspect of Gibson Ridge, BTL, just outside of Crested Butte.

Weather: Clear sky for the first half of the day, becoming mostly cloudy by the late afternoon. Light winds with some moderate gusts at upper elevations.

Snowpack: Heading out the valley in the morning, the snow surface had only formed a soft crust overnight with moist snow below. Returning in the afternoon the lower elevation snowpack was becoming unsupportive and punchy on east to south to west aspects and up to an observed 11,500ft on a southerly aspect. Skiing on Treasury Mountain in the alpine still held great cold pow on true north and had an ok warm snow surface on a southerly facing slope in the early afternoon.

A 5 person group of snowmobiles tagged many summits in the Paradise Divide area and tested many slopes. It didn’t appear that they triggered any avalanches. They were also smart with their terrain choices and had moved on to slopes not in the direct sun by the afternoon. 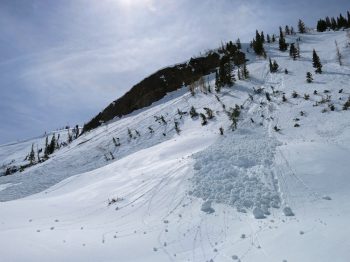 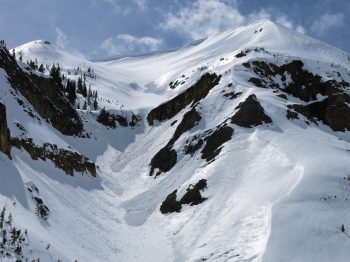 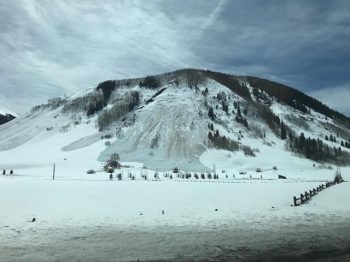 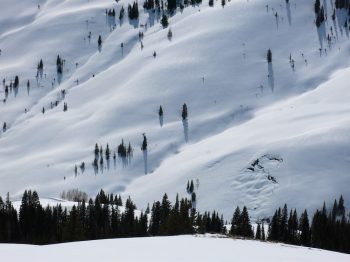 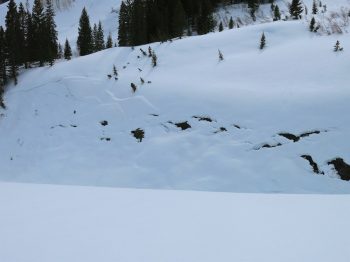 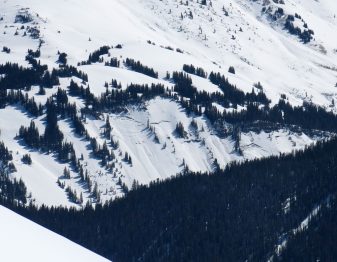 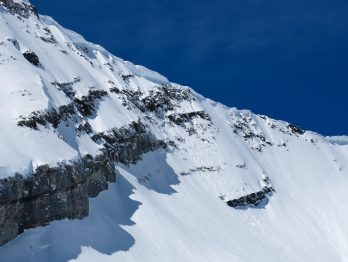 Fresh Cornice fall on a northerly slope of Treasury 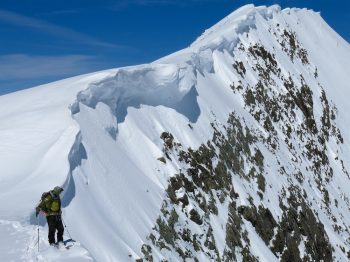 1 x loose wet pushed out on steep SE face in a radiator bowl feature.
Skier on ridge punched into cornice on travers even being 12’ back from the edge.

Snowpack: SE slopes at ridgetop became mount to wet in the recent new snow and could be pushed into D1 sized wet loose avalanche in some places. Low angle North had a firm crust NTL and BTL, but soft, punchy more of wind crust on steeper ATL.
NE-N slopes at and above 12,000’ still held dry snow, but it is becoming affected by warm temperatures especially where protected from cooling winds.
Photos: