Avalanches: Lots of previous Wet Loose from steep sunny areas all small in size. Did not observe any fresh loose avi’s while in terrain between noon and 5pm. One fresh Wind Slab observed at 12k on NE slope.
Weather: Mostly clear skies with warm temperatures. Strong SW winds at upper elevations with gusty conditions below treeline. Snow transport was generally inefficient due to high speeds blasting snow into the atmosphere; isolated features picked up loading.
Snowpack: Traveled through a shallower part of the forecast area moving through shady slopes near and above treeline. Snowpack on north and northeast slopes at upper elevations was generally in the 130 to 180cm range. A test profile in a drifted location(northeast) with 200cm had a slab around 55cm thick (up to 1 finger hard) resting on the mid-March weak layer and did not produce results in standard test but hard hammering was able to get a propagating result. At a shallower location with HS around 135cm, I tested the basal weak layer which produced a moderate propagating result in the Depth Hoar (4-finger minus hardness) near the ground. Even though triggering a large avalanche in old, weak snow at the ground is on the low end of the probability scale, the variability of snow depth in this part of the forecast area made me a bit selective with my terrain choice by avoiding rocky, variable depth slopes.

Briefly traveled across a few sunny features between 10,000 – 11,200′ and found a few inches of wet snow at the surface, but no significant Wet Loose problem. I suspect some steep, wind-protected sunny slopes were in condition for human-triggered small Wet Loose slides. Low elevation northerlies became moist by the afternoon, but neighboring steep slopes did not produce any natural activity. 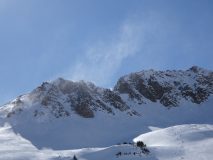 A good example of the wind blasting snow into the atmosphere with only a few features in the area loading. 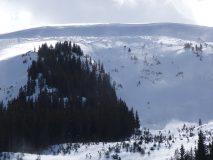 Fresh Wind Slab on NE slope at 12k. Believe this failed sometime between noon and 430pm.