Snowpack: Thin and weak below treeline with dry snow on the northern half of the compass with moist snow and softening crusts on the southerlies. Due south at lower elevations was a thick fully supportable crust. This crust became soft and thin as you moved towards East and on a NE aspect just below 11k there was no crust present. This location had previously avalanched and was only harboring 60 cm of all weak and faceted snow. The 3/10 interface(1-1.5 mm NSF) is buried about 20cm below the surface and quite weak.

Moving up in elevation to just below 12,000 we targeted an easterly aspect focusing on the deeper weak layers from December and January. The December weak layer was Fist hard, 4 mm dry Depth Hoar with little to no rounding occurring. Long column results on this layer were ECTX with a PST 40/100 END down 100 cm indicating this layer is currently unreactive but still holding the potential to propagate a failure. Identical results were observed on the 1/19 layer(down 75 cm) at this location.

Winds were blasting and swirling snow more than building slabs, other than isolated and small pockets. 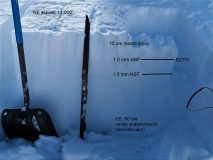 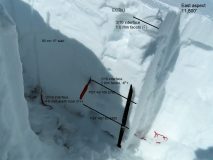