Avalanches: Triggered 1 small persistent slab on a NE slope at 11,200ft. This avalanche was triggered from the ridge above and about 10 feet away from the crown. The crown height averaged 30 to 45cm. The weak layer NSF at the 1/19 interface. This slope had avalanched previously back in December. I’ve been by it about once a week since December. The snowpack remind weak every time I had previously passed it and it took this long to rebuild a slab. The storm at the end of last weak finally had added enough snow and the following warm temperatures probably helped develop the slab. This slope didn’t have any fresh wind-loading form today.

Weather: Mostly cloudy to overcast. The winds were mostly light down in the valleys. Climbing up above 11,000ft those winds became strong to extreme. Those winds were eroding some windward terrain, and mostly just blowing snow away, vs actually loading lee aspects. A couple inches of new snow at best, up at 11,000ft and only a dusting of new snow down in the valley. Lots of graupel. I did see a snow-nado. Thats always cool.

Snowpack: Early afternoon tour, ending by about 3pm. Looking around to see how the current storm was going and what was changing. The current storm had made little changes in the area traveled. Sure there was more going on up in the alpine, otherwise where I traveled it was just a whole lot of wind and not much new snow, yep… Didn’t find any freshly drifted terrain features to further investigate. 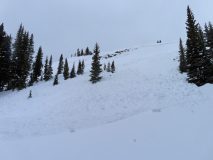 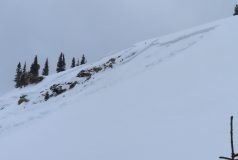 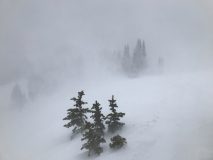