Weather: Day started out with lots of high clouds and ugly flat light for snowmo trail breaking through weak, garbage snowpack, but as the day progressed clear skies prevailed with partly cloudy conditions. Winds were generally light, no transport observed. Temps were cold in the morning at valley bottom, but quite comfortable near treeline in the afternoon.

Snowpack: We moved through BTL and NTL on mostly S – W facing slopes. HS below treeline was around 60 to 90cm. As we climbed higher to treeline HS ran from about 100 to 130cm. Our objective was to target NTL SW and W slopes looking for Persistent Slab structure.
The first site was a SW facing slope at 11,400′. Here snowpack across a large area ranged from 100 – 120cm. We poked a hole and found that the 1/16 & 1/18 storm left a cohesive slab resting on a poor looking SH/crust/facet/crust sandwich. Test results produced ECTP 27 result above the 1/15 suncrust on SH. This is not the first place near treeline on a sunny aspect we have found buried SH. The PWL crap stack was down 45cm. Take a look at the photo below to see the test profile.
We also targeted a W facing slope just a bit higher at 11,600′. HS ran from 120 to 140cm across this terrain. Here we found snowpack that harboured the persistent weak layers from mid-January. Two layers of SH with a thin layer of facets between, 45cm down-again this structure is widespread across the CBAC forecast area on W-N-E facing slopes near and below treeline. The mid-December weak layer was obvious and still weak. ECTP 21 at the 12/19 interface. See photo below
Looking into the shady side of the ridge towards Teo and West Brush Creek, the couple of avalanche paths we peered into had run sometime early during the 1/16 & 1/18 storm events. Crowns were refilled but just barely visible, debris piles were visible on the valley floor below.
West facing above and near treeline terrain in upper Brush Creek and Upper Cement Creek looked shallow and blown out. See photos below. 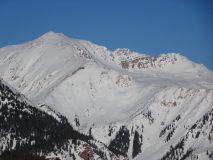 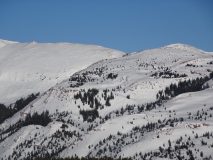 Timbered Hill foreground – part of Carbonate Hill in back 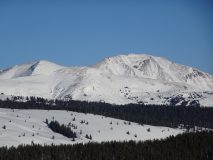