Numerous D1 loose went avalanches from the previous day on sunny near and above treeline slopes. Evidence of very large, but old avalanches from over a week ago – crowns well drifted in. There were a few more recent avalanches from the middle of last week during the last snowfall and wind event around 3/13- D2.5/D3 failing in old snow on the west side of Mt. Owen ATL, D2.5 on easterly piece of terrain on East Beckwith failing in old snow NTL, and a D1.5 on north facing ATL slope on East Beckwith that failed only in last weeks storm snow and was triggered by a dry slough.

Snowpack: Took a trip to the far west side of the forecast area. Down at Horse Ranch Park area, HS averaged around 180cm @ 8,900′. Ascending to Beckwith Pass area found HS around 280cm at 10,500′. Dug a couple quick holes looking for any concerning structure on shaded slopes in the upper snowpack but not notable test results or layers of concern. Like much of the range, weak layers are down near the bottom of the snowpack-you could feel density change by using probe. 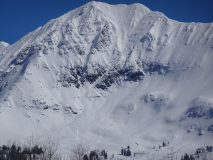