Avalanches: Knocked off a small wind slab that had loaded low into one of the chutes in the playground. Observed a large wet slab that appeared to be only a few days old.
Weather: Warm but strong south winds were keeping slopes from wetting extensively. Winds were blowing up the basin and loading in the north chutes from the bottom as well as other aspects.
Snowpack: Dug several handpits on the the way up north facing where there was a small facet layer 30cm down under the new March snow. South facing was wetting in the new snow but crust underneath was supportive all day. Wind affect on most aspects after midday. 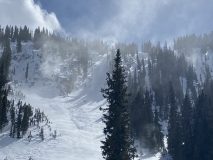