Avalanches: Good views midday showed no recent avalanche activity.
Weather: Partly cloudy skies, with a good amount of sunshine in this area. Snow showers developed in areas east and west of Elkton, but no snowfall from 1130 – 430. Some thunder was heard from nearby convective cells. Maybe an inch or so of new overnight in this area. Winds were variable and light – very little blowing snow observed at upper elevations.
Snowpack: Covered a lot of ground on the snowmachine looking at sunny slopes. Most sunny terrain SE-S-SW had moist to wet surface snow sitting on older, well-developed melt/freeze crusts. On these sunny slopes, I anticipate the incoming storm system to fall on supportive crusts without much concern for developing a Persistent Slab problem. Shoulder aspects, east and west, had a few inches of dry snow resting on soft/melf freeze crust with additional soft crusts in the upper snowpack.

Shaded slopes facing very close to due north remain dry without crusts present, but as soon as you tilt eastward crusts show up below the snowfall since Saturday night. There are two layers of interest in the upper snowpack on shaded slopes, the upper being a melt/freeze crust with 1mm facets below and the other the mid-march weak layer with 1-1.5mm facets. At one near treeline site facing northeast, HS 155, I got moderate propagating results on the mid-march weak layer. Test results grabbed my attention – triggered avalanches are possible in the upper snowpack with a similar structure.

Closer to Washington Gulch TH I checkout a north slope with a much shallower snowpack, closer to 90cm, and found a fairly weak snowpack. Just an inch or two of recent snow sits on a soft melt/freeze crust with very weak 1-2mm facets below. A poor-looking structure for future loading events. 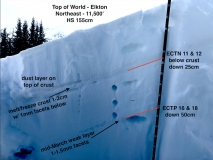 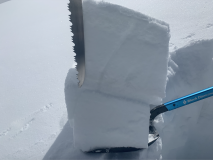