Weather: Clear sky in the morning, with high thin clouds moving in for the afternoon. Calm winds. Cold and inverted temps.

Snowpack: Headed back to some west and northwest terrain that I had traveled through 6 days ago. Back then we produced some, far-running, shooting cracks on the early December facets, and kept it conservative while traveling through the terrain. Today started off appearing quiet. A quick test pit showed a snowpack structure that wasn’t drastically different than 6 days ago. An ECTN result also started looking promising. HS at that site was about 80cm and the 4F to 1F- slab just barely couldn’t support boot pen, but obviously still supported skis nicely.

Once I got onto a few slopes we hadn’t previously traveled on, the collapsing snowpack and shooting cracks started to show up again. These cracks were not running as far as a week ago, but they still didn’t inspire confidence to get closer to bigger slopes. All the slopes I traveled through were relatively small and supported. 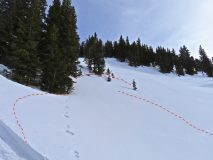 Example of shooting cracks. NW aspect, 11,200ft. If you moved out further under the bigger slope, would it collapse? And/or would the slab displace?