Triggered a couple pockets in dense, east facing trees. D1’s as these avalanches would get dammed up by thicker trees below, but full depth 80 to 90cm avalanche crowns.

Weather: Partly cloudy sky. Winds were calm, even at ridgelines. Plumes at times off the high peaks but nothing to steady that I could see.
Snowpack: Snowpack structure was quite variable between one avalanche problem to another or none at all. The most widespread problematic structure was last night’s (F) snow and the old (F) Christmas snow sitting over very weak facets. There wasn’t much for slabs, more those upper layers of very soft snow collapsing into the large grained facets below, then cracking as the whole mess just wanted to slump down hill. If you couldn’t get the slope to collapse, then slow moving loose snow avalanches were the main concern. These would entrain the whole snowpack and just slowly push there way down steep slopes.

Up-tracking in the old growth forest was the most avalanche-prone area. As the Christmas Snow still had some slab to it and aided in propagation as the snowpack collapsed again into the larger grained facets near the ground. I’ve never encountered something where the most significant avalanche problem was in the forest. Get on something over 35 degrees and it was almost certain you could get the slope to avalanche if it hadn’t avalanched previously this winter.

There was some recent wind-loading near ridgeline but not much. Last nights snow also had a little better slab properties near ridgeline in places. We collapsed one very large start zone that propagated and cracked 80% across the start zone or maybe 100ft. While a similar start zone, just down the ridge, was just all weak or soft snow with no slab issues.

This NE start zone cracked across 80% of the start zone and back on the ridge as we neared.

A failed kick-turn resulted in this small Loose Snow Avalanche on an easterly aspect. Numerous other skier triggered or natural loose snow avalanches in the terrain.

This soft PS avalanche problem was almost certain to trigger in the northeasterly facing old growth forest above 10,400ft. 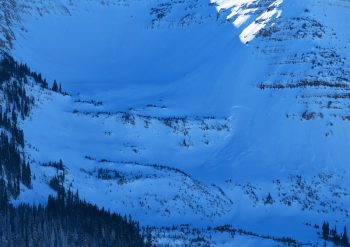 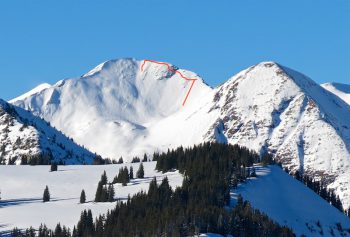 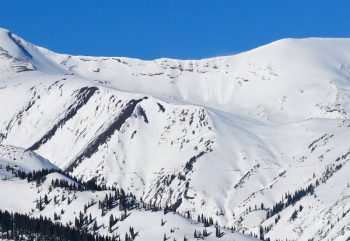