Avalanches: Spotted several new slides, a D1 east facing slab near Wolverine Basin, D1 slab NE low down on Schuylkill Ridge(reported in early ob from today title Slate obs by Joey), several D1 loose(likely wet) on south slopes below Paradise Divide proper below treeline, and another D1 on on east aspect of Cinnamon (hard to tell if loose or small slab because of oblique viewing angle.

Weather: Skies were partly cloudy with mid and low-level clouds moving in and out during the day. Light snowfall on and off as well but no real accumulation. Winds below treeline were calm to light with little to no gusting. Ridge top winds, at treeline, picked up a bit with visible efficient transport of snow just up the ridge from us.

Snowpack: While ascending generally east facing terrain, we did not experience any collapsing. Below treeline HS ranged from 70 to 100cm. Dug quick hole on east aspect, 30* slope, 10,200′ found HS 100cm. Basal 10cm were moist facets (moist enough to make quality snowballs out of 2mm facets) that were showing signs of early rounding process. The overlying slab was pencil hard at the bottom but was mostly 1finger and quickly transitioned to 4finger and fist at the surface. CTH results on basal facets, and CTM, Q2 result at interface atop Thanksgiving slab. In adjacent area poked a quick hole on NE aspect and found facets at the ground to be dry.

As we approached treeline, depth became a bit more variable from the wind, but HS bumped up to around 70 to 125cm on the skin track. On final portion of skin track, we were nipping at the shallow edges of deeper, drifted near treeline slopes in excess of 30* without any results.

Got a reasonable window of visibility at ridge top, take away was many westerly slopes above treeline still have available snow for transport, ex. west side Purple Ridge, westerly bowls of Baldy, and west side of Gothic. 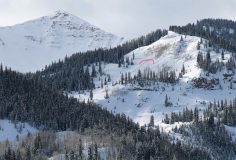 D1 on ENE slope near exit of Wolverine Basin 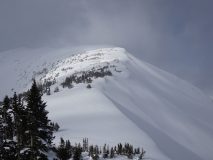 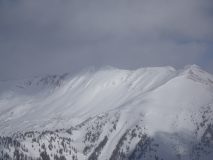