Avalanches: We intentionally triggered a hard slab avalanche on a small, heavily windloaded terrain feature on an east aspect below treeline. The slab was about a foot thick and about 300 feet wide, D1.5 in size. It was made up of windrifted snow failing on weak facets.
Weather: Clear skies, mild temps, periods of moderate to strong gusts drifting faceted snow.
Snowpack: We traveled mostly on low angle terrain below treeline and some steeper slopes on westerly aspects near and above treeline. Below treeline, we triggered about a dozen collapses and shooting cracks on the 12/10 interface which is about 15″ down, 4-5mm depth hoar. Collapses were mostly in concave or leeward terrain features that had collected additional windloading from last night’s winds. Wind drifts were pencil hard, 2″ to 8″ thick on average, and localized to mostly just drainage bottom. The drifts themselves also cracked easily under our weight where they formed on near surface facets. As we gained elevation, it appeared that winds mostly just scoured snow away on all aspects. The few drifts that we found were thin and unreactive. On steeper westerly aspects, we didn’t observe any signs of instability; the snowpack is generally thin and all weak facets, apart from a wild mess of firm wind crusts and sastrugi on the surface.
We targeted a test pit just above the crown of a large avalanche that ran naturally in late December on an east aspect above treeline. The slab was 60 cm thick, and is faceting throughout, but still has about 10 cm of 1F- in the midpack. The failure layer was 2-3 mm facets either above or below a soft (4F) decaying meltfreeze crust. Stability tests on the structure today produced hard, non propagating results in an extended column test (ECTN28 x 2), and propagating results in a propagation saw test (PST40/100 END x 2 on 20201210) just above the crust. 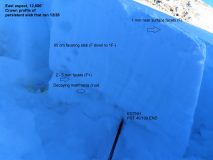 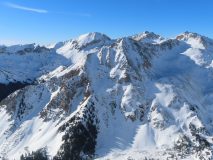 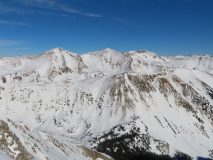 West facing terrain above treeline was thin and all facets where we traveled. 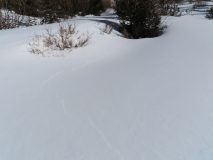 Shooting cracks and collapses on windloaded features below treeline 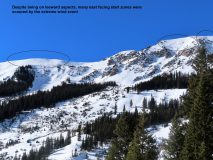 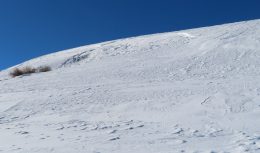