We remotely triggered a 2.5 foot thick persistent slab on a west aspect near treeline, small in size because it was on small terrain feature. Classic persistent slab behavior: skinned over the convexity expecting to trigger something, but then it went remotely after I was 30 feet away from the slope. We also noted a number of fresh natural slab avalanches below treeline closer to town (small in size), along with a dozen or so similar slides near Lake Irwin that ran earlier in the week, mostly N to E aspects N/BTL.

Weather: Pulses of moderate to heavy snowfall through the day. Light ridgetop winds where we traveled. Mostly cloudy skies.

Snowpack: The snowpack is still angry. About 8″ of storm snow produced minor cracking and a lot of small sluffs. But the big problem continues to be the buried 12/10 layer, which consistently produced collapses and shooting cracks on most low angle slopes that we traveled on. The persistent slab structure is still mostly fist hard, 18″ below treeline, and almost guaranteed shooting cracks and soft collapses on anything facing east or north. Near treeline, the slabs are a bit stiffer (up to 4F), 2′ to 3′ thick. The basal facets are capped by a stiffer wind crust so the collapsing isn’t quite as common, but booms and radiates further when it does.
We were targeting some forecaster uncertainty on how reactive SE aspects NTL are. Pits on suspect SE slopes showed the crust is thick, lacking a collapsible weak layer. Lower angle SE aspects still produced collapses because the crust is thinner. The few representative steep test slopes that we crossed didn’t produce any collapses, which was in contrast to a noisy snowpack on more easterly aspects.

RIP Jeff.   I’ll miss your smile at the trailhead. 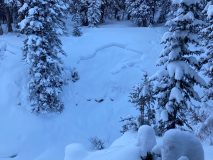 Plenty of natural slides like this from earlier in the week, mostly east and north aspects 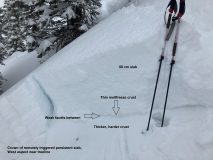 Crown of a remotely triggered slide 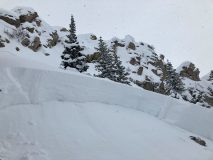 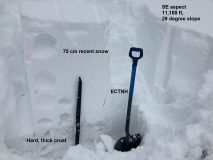 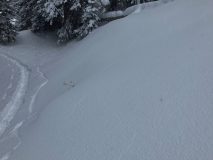 Collapses and shooting cracks on most open slopes 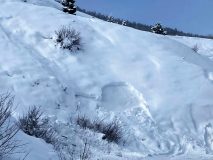 One of several small naturals near town, BTL. 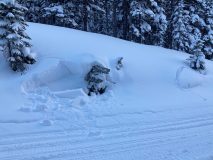 Remotely triggered pockets while sidehilling above the road on sled.