Avalanches: In a path that ran in mid-December, we skier triggered a long-running facet sluff that gouged to the ground. It ran about 1,000′ vertical feet and entrained about a foot of weak faceted snow, about D1.5 in size. Good communication from partners watching from ridgeline prevented this sluff from surprising the skier. It started off very small and slow but picked up quite a bit of speed and punch by the end.
Weather: Inverted temps, thin broken cloud cover in the afternoon, calm winds.
Snowpack: In the windsheltered terrain that we traveled in up to 11,000 feet, the slab has mostly faceted away. There is some residual 4F or 4F- faceted midpack. Test results on this structure were unreactive.
We tested a windloaded terrain feature near ridgetop (11,300 feet). The slab is noticeably denser (up to 1F midpack), and the test produced hard propagating results.
In some terrain that avalanched in mid-December, the snowpack is entirely fist hard, large grained facets. The structure is quite weak, and now capable of producing full-depth sluffs in steeper terrain. 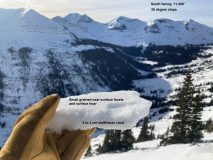 South facing terrain has a persistent weak layer on the surface currently.

Skier triggered facet sluff on a slope that avalanched in December 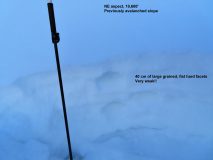 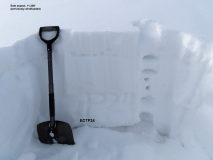 Windloaded terrain near ridgetop produced hard, propagating results where the slab was denser