Of other particular note: There were 3 very large avalanches on Skooks that were first observed on Saturday Morning 2/13. These avalanches were estimated to have run during Friday/Saturday morning increased winds, and before the winds calmed during Saturday’s storm. We checked on one in Thanksgiving Bowl. This bowl has seen a number of different avalanches this season. This particular avalanche pulled all the way back to the ridge, had a max crown height near 4 meters. It was just another very large avalanche to crush the valley in February.

Snowpack: Schuylkill Ridge should probably be renamed the Great Wall Of Crowns by this point. We have plenty of observations of all the activity, many different avalanches, and groups of avalanches from different cycles throughout this season. We got another chance to check back in on the wall this afternoon.

Of course no obvious signs of instability. That statement mostly comes from traveling on where the snowpack is full depth and weak layers are far below, or from avalanche paths that have previously run and not redeveloped a slab. HS averaged around 165 to 185cm between 10,100ft and 10-500ft, for slopes that are mostly holding the full season snowpack. We eventually skied an avalanche path that ran on 2/5 and had about 50cm’s of snow loaded back on the bed surface. 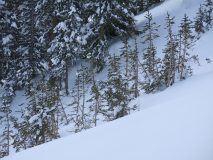 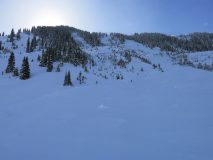 These sharp crowns in Thanksgiving Bowl are from a D3 avalanche estimated before sunrise 2/13. Plenty of past activity in this bowl too. 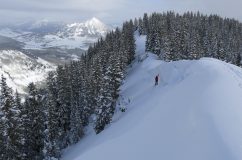 The 2/13 D3 in Thanksgiving Bowl crown pulled all the way back to the ridge, 4.5 meters deep. 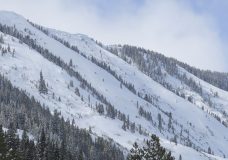 Another wide propagating crown on Skooks estimated before sunrise 2/13 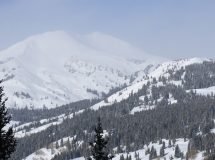 A fresh crown on a west aspect of Anthracite Mesa 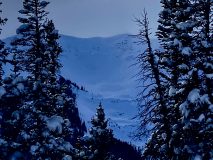 A portion of the very large and widely propagating crown on Peeler Peak’s north bowl.