Avalanches: Nothing recent apart from a handful of very small wet loose sluffs. Plenty of previously undocumented large avalanches from the last widespread cycle (~February 13) at all elevations. We crossed a debris pile that was easily D3+ off of the southwest face of Ruby that only had about 6″ of snow on it, so I’m guessing it ran February 16. See photos.
Weather: Light westerly winds, no transport. Few clouds.
Snowpack: Targeted below treeline test pits hoping to see evidence that basal weak layers are gaining strength now that they have been buried by a deeper pack for a few weeks. Unfortunately, that doesn’t seem to be the case. The 12/10 layer is still large grained and angular, showing little signs of hardening or sintering. All test results propagated with sudden collapses, ranging from very easy to hard (ECTPV, ECTPMx2, ECTPH), 70 to 90 cm deep on depth hoar or large-grained facets on a crust. If there is anything improving the current structure, it is that the upper slab is faceting on shady aspects and meltwater is moving into the pack on sunny aspects, which should add some integrity when it re-freezes. I jumped on a few small, steep test slopes with no feedback, and we didn’t see any obvious signs of instability throughout the tour underfoot. 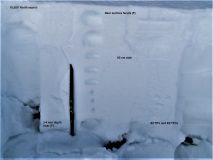 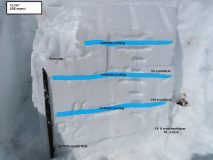 Moderate to hard sudden collapse results on southerly. Meltwater pooling along the several weak interfaces from January and February. Slab is still dry and meltwater hasn’t hit the 12/10 layer here yet. 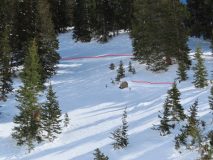 An example of several below treeline slabs that ran during the last cycle several feet thick. 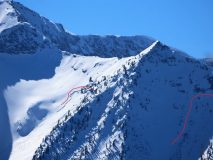 Older D2s on East Beckwith. The one on the left was previously reported. 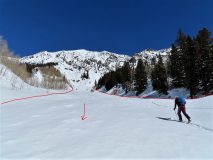 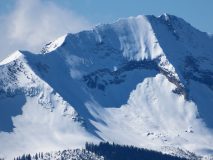