Avalanches: Ski cut a couple of thin wind slabs below treeline, about 6″ thick, that formed this afternoon, D1.
Got good views of the large avalanche reported yesterday from Schuylkill Ridge. Based on the size of the crown, I estimate that it failed on the 1/19 interface about 18″ deep and gouged near to the ground. That path ran in mid-December and the snowpack prior to this recent storm was very thin. See photo.
Saw another persistent slab (probably 1/19 interface) that likely ran in the past 24 hours, triggered by a sluff from a cliff band above on an east aspect BTL. D1.5
Had good views of other terrain visible from the Slate River Road and didn’t see anything else noteworthy.
Weather: Light snowfall (S-1 to S1) started around noon, with a few moderate pulses (S2) mid-afternoon. W/NW winds showed up around 2 p.m. – moderate with strong gusts produced light to moderate snow transport where we traveled, which was mostly below treeline.
Snowpack: Recent storm snow has settled noticeably since my tour yesterday on Kebler Pass. There’s about 16″ of F+/4F- soft slab over the 1/19 interface. We experienced a couple of large collapses and a handful of smaller, muffled collapses. A few stability tests on both east and west aspects below treeline showed similar structures and non-propagating results. The snow surface was getting denser due to this afternoon’s winds.
We kept to generally simple terrain and a few short, steeper pitches. We didn’t have any avalanche encounters other than some small wind slabs. 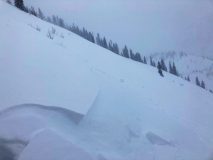 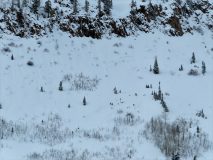 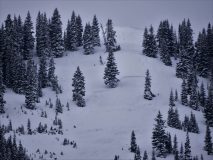 The crown of the skier triggered avalanche on Schuylkill Ridge yesterday.