Saw a few harmless (D1) dry loose avalanches that ran yesterday or today on east aspects from solar warming near rock bands and one that was animal triggered. Snowboarder triggered a very thin wind slab (D1) on a cross-loaded north-facing gulley, about 10 feet wide.

Snowpack: We traveled in steep terrain and found a generally quiet snowpack with a few small instabilities. At ridgeline there were isolated wind slabs up to 6″ thick from northerly winds earlier this week overlying well developed near surface facets. These produced localized cracking/collapsing in very small pockets in a few locations, and we triggered one small slab in a gulley. The snowpack is generally still supportive on to skis, you can find some terrain features with bottomless facets but the snow depth in those areas is too shallow to produce more than a small sluff, exemplified by the photo of recent naturals.
Surfaces in sheltered areas are generally 1 mm, fist hard facets. In the alpine, more wind texture and some variable wind crusts capping the facets, along with stiffer crusts below the facets from previous wind events: more of an abrupt hardness change. 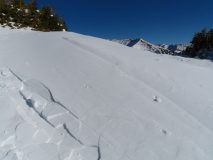 We got several localized collapses in small wind drifts. The collapses were on the near surface facet layer that has been developing for several weeks now, but was drifted over in isolated locations from recent northerly winds 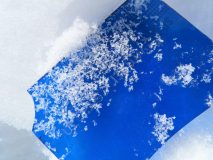 1 mm facets are fairly widespread on the surface or below wind stiffened surfaces. 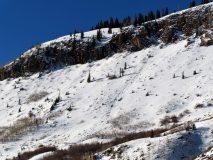