Avalanches: Observed 3 overnight natural avalanches on Mt. Baldy. One broke in Paradise Bolw on a west aspect, the other two broke on easterly-facing terarain. All three were continuing to load during the day and the crowns filled in during the day. We triggered two D2 avalanches in currently wind-loaded terrain. One triggered slide broke remotely on an alpine southeast-facing slope while we traversed a ridgeline above. It broke 1-2 feet deep, stepping into a layer of near surface facets below the recent interface. The other slide broke directly underfoot with some heavy stepping. We expected that we might remote trigger the slope that broke underfoot, but it didn’t go until we stepped on the edge of the slope. The actively loaded south-facing slope broke about 4-6″ deep under the front half of my skis. The slab broke about 100′ wide and pulled out a 3-4’fresh slab under a cornice. The slab ran around 300′ vertical depositing 2-5′ deep debris at the bottom of the slope.
2021/01/06 † Elkton 2 >TL E SS N R1 D2
2021/01/06 † Schofield Pass 1 >TL W SS N R1 D2
2021/01/06 † Elkton 1 >TL SE SS AS / r R1 D2
2021/01/06 † Elkton 1 >TL S SS AS / c R1 D2

Snowpack: 6-8″ of new snow that was drifted on east through southeast to south-facing slopes near and above treeline. Slabby feeling snow with significant snow surface duning and ripples developed and changed through the day. 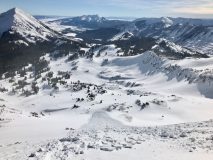 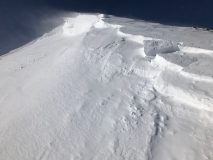 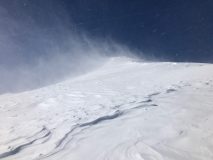 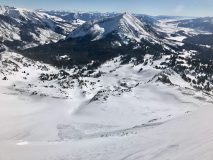 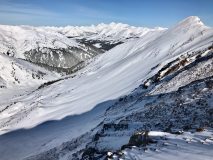