This article will be published in this week’s Crested Butte News. 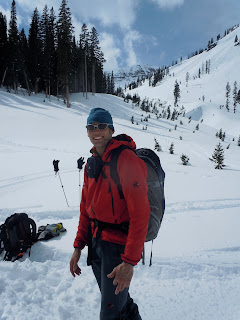 By John MacKinnon
CBAC Forecaster
The long-range weather models are beginning to show those dark red and purple bulls’ eyes of precipitation stacking up over Colorado in the coming week. This is great news because it means winter is finally on its way to Crested Butte; but it is also important to remember that any significant snowfall will bring a return to dangerous avalanche conditions.
Many people are already comparing our delayed start to winter to last year. What both years have in common is a couple of early season storms between late October and mid-November which have been followed by long dry spells. Long dry spells with cold clear nights and mild sunny days have provided the perfect ingredients for our existing snowpack to morph from snow-flakes into large angular snow crystals known as facets. During both years, much of the early season snowpack turned into weak sugary snow during the first part of winter.
So this brings us to the question of what is going to happen when it actually starts snowing. If Monday’s storm (12/3/12) is any proxy for what will happen when we get a significant load of new snow, the results following the upcoming forecasted storms could be impressive. The storm from earlier this week dropped between 1-5” of snow onto our fragile snowpack. As winds pushed this snow around and drifted it on to specific slopes, many small avalanches occurred—most human triggered but some occurred naturally. The weak faceted snow crystals could not support even the smallest of loads.
It is especially important to remember the effects of Monday’s storm if we get a good 12” of snow in the next couple days. If Monday’s storm was akin to throwing a couch cushion onto 50 fluted champagne glasses, imagine what would happen if you began stacking mattresses on those same glasses. Our weak base of old snow would quickly and dramatically fail if loaded with a foot or more of new snow. A mix of patience, caution and respect could be the best tools for dealing with backcountry riding for some time.