Avalanches: Skier triggered a persistent slab avalanche on an east aspect BTL. The slab didn’t propagate widely (about 20 feet) and was about a foot thick, small in size. In steep, sheltered terrain that has previously avalanched, we triggered several small dry loose avalanches to the ground.
Noted a crisp looking crown above East River (east aspect BTL, D1) that seems as if it could have run last night. It was triggered by a sluff from above.
Noted a handful of older slab avalanches that ran during the wind event a few days ago on leeward aspects near treeline.
Weather: Clouds increased throughout the day. Light ridgetop winds. A few flakes started falling this afternoon. 1″ of snow last night.
Snowpack: Despite the persistent slab structure clearly faceting and losing cohesion, we were impressed by widespread collapses, many of which radiated cracks up to 100 feet away. Most low angle, open slopes that we traveled on collapsed audibly and produced shooting cracks. If there was a pattern to the slopes that produced far-reaching collapses, I would say it was most commonly where there’s a residual crust layered between the basal facets (on slightly sunnier inclines or aspects). The basal facets are evolving into chains of depth hoar here. (3mm, striated, Fist- ) The slab above is about a foot thick, fist hard and faceting. Near ridgelines at treeline, there are lobes of much harder, thicker slabs and areas where the snowpack is wind eroded almost to the ground. Collapsing was less common in the wind hardened areas, but we still got several very loud ones triggered from where the slabs thin.
In spite of what was clearly an unstable snowpack, the instabilities didn’t translate well into the avalanche terrain that we tested with remote collapses or ski cuts (on smaller terrain features). On lower angled avalanche terrain (~30 to 35*), the slopes would crack, perhaps slump a few inches, but not avalanche. On steeper angled avalanche terrain (~37* +) it seemed that almost everything had previously avalanched; the snow depth was roughly 10″ and was facet sluffing to the ground.
The 12/22 interface is a few inches deep and is showing clean hand shears and minor cracking. The interface consists of near surface facets (northern half of compass) or small grained facets below or between crusts turning east or southeast. 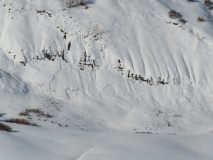 These slides looked fresh enough to have run last night 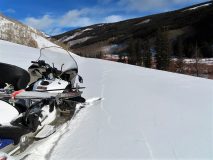 Shooting cracks on the road in front of WarPig, CBAC’s road hog 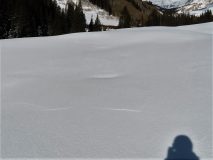 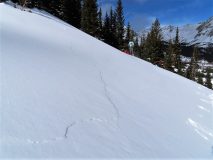 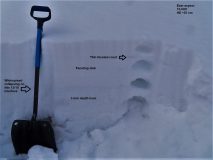 The snowpack structure below treeline 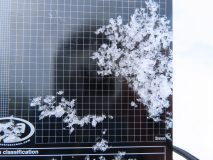 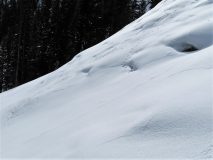 More collapses and cracks radiating across the slope 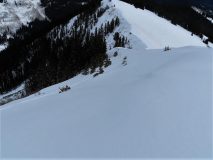 This is a windloaded start zone about 30 to 32 degrees in steepness. It produced a huge collapse but only slumped a few inches downslope. 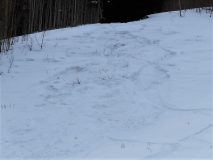 Skier triggered persistent slab. Minimal propagation seems to be a result of the slab decaying and losing cohesion.