Avalanches: While heading out Slate River Road noticed two unreported avalanches on the far end of Schuylkill Ridge and the sub-peak of Schuylkill Mountain. Both avalanches were easterly near-treeline features. I suspect they ran on Saturday or Sunday. Both D1.5’s
Weather: Sunny day, with mild to warm temperatures with light winds near and below treeline.
Snowpack: Recreational ski day just enjoying the sun. Southerly slopes near and below treeline had a soft melt-freeze crust at the surface in the morning that became moist throughout the day (exited terrain by 1pm). I suspect supportive melt/freeze crusts will develop from today and tomorrow’s forecasted mild weather on steep, sunny slopes near and below treeline. Lots of collapsing on low-angled south-facing slopes that are of little concern. More concerning was walking around the top of small east-facing, near treeline features, I was able to produce a collapse that shook a small wind-lip well over 100 feet away – slope was only 25 – 30 degrees steep so it did not slide (it took a bit of wandering around until I was able to produce the collapse, classic PSa behavior). Briefly moved over several west-facing near treeline features and produced a collapse on each but slopes angles were only about 30 degrees so nothing moved.
Skied several short steep south and southwest facing features without result, quick pole probing did not reveal any concerning structure. 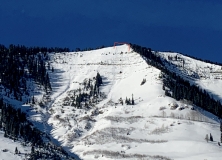 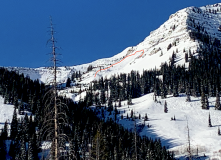 Avalanche that ran on an easterly-aspect of Schuylkill sub-peak sometime this weekend.