Avalanches: Limited visibility obscured views of most near and above treeline terrain.
-A few small natural wind slabs on east and southeast aspects near and below treeline that ran last night or today. These all looked to be about 6″ to 8″ thick
-A small persistent slab that looks like it was unintentionally skier triggered from below the slope, about 18″ thick on a southeast aspect below treeline
Weather: Overcast. Light to moderate NW winds where we traveled, drifting visible in exposed terrain. A few pulses of moderate snowfall (S2), but generally light snowfall or lulls through the day, with 1″ to 2″ of accumulation.
Snowpack: About 6″ of new snow that felt topheavy from the increased wind speeds late in the storm. Easy to produce cracking in wind affected snow. Plenty of evidence of drifting overnight, even on exposed below treeline slopes.
We traveled mostly below treeline on existing skin tracks and areas that have seen a fair amount of traffic this week. Stepping away from tracks, I got a few small collapses and one large collapse on north and southeast aspects. Pits at these locations showed easy to moderate propagating results, 1 to 2 feet down on the 1/19 facet layer. See photos. We ski cut a few steep slopes with no results. 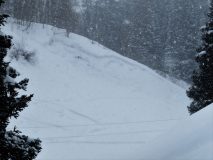 Persistent slab looks like it was triggered by a skier undercutting the slope today. SE aspect BTL 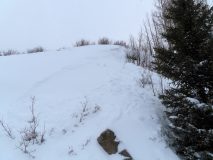 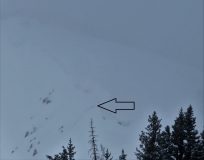 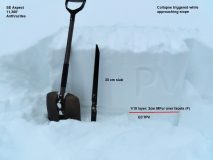 Triggered a collapse just before digging this pit. 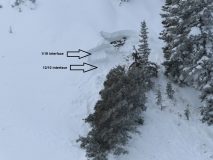 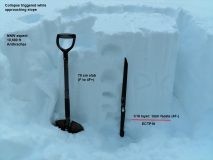 Triggered a large collapse just before digging this pit. 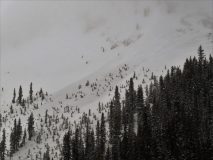