Weather: Clear and mostly calm. Some light winds just able to move snow from the north side of the ride to the south side at times, above treeling.
Snowpack: Kicked it off on E ATL. Snow on the exposed ridge was fluffy, how often does that happen? Some sluffing in the new snow otherwise nothing notable. Same slope as in this picture from 12/29. Weak layers are present, but all the ingredients where not there for a slab release on this specific part of the slope. This slope had seen a shallow but fairly wide natural windslab on 12/30 likely failing on the upper most weak layer.

Moved to more SE NTL by 1pm and those slopes had become moist at the surface. The structure on these slopes was fairly simple, with generally soft and faceting snow over a crust over more weak faceted snow. Other then the curst there wasn’t really anything to propagate . Steeper slopes the crusts was stronger of course and lower angled slopes is where the crusts where more brittle and collapsible. Somewhere with more of a slab, like wind-loading on this structure, would have been more concerning.

NE 11,300-9,000ft. Steep, aggressive, mostly open BTL type terrain. Sluffing was the primary issue. Small sluffs where running long distances and accumulated mass as the gouged into the weak snowpack. Skiing a steep ridge feature, the lee side of the feature produced shooting cracks in a couple places that didn’t propagate much. Was able to get a larger D1.5 slab/sluff or slub thing to release at about 10,100ft. 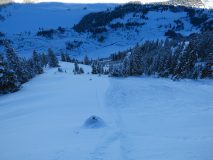 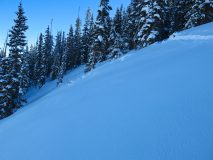 The largest shooting cracks at 10,800ft NE. Just lower on this slope the snowpack became much weaker as it had avalanched back around the Christmas Cycle. 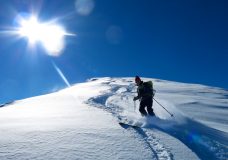 Plenty of snow available for transport. Powder skiing on a wind exposed ridgeline above treeline.