Avalanches: Several Fresh Natural avalanches from the last 24hrs. East to North-East facing Happy Chutes had multiple D1.5’s and a few D2’s with full feature propagation. Climax may have had a few new avalanches but it’s getting hard to call. It’s such a battle zone of avalanches out there. The next notable couple of avalanches were very fresh. D2 below treeine on Skooks in the great wide open. D2.5 on the Yule Pass to Purple Peak ridge, east-facing above treeline.

Snowpack: We skied steep south and southwest facing slopes between 9,700ft to 11,200ft. The only signs to instability here, were transitioning from low angle slopes to steeper slopes. Basically December snow on the ground or a crust that was also on the ground. Nothing significant in hand pits. Between 11,200 and 12,000ft we traveled on low angled west-facing slopes. These produced large collapses and shooting cracks. The instability there was obvious. 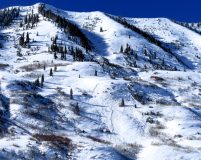 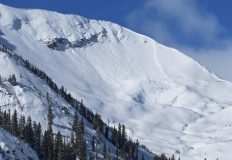