Weather: Mostly cloudy sky in the morning cleared out to few clouds through the day. The cloud bank still didn’t make it overhead at sunset. Calm wind down in the valleys and nice warm temps.
Snowpack: The slabs that formed in late November are holding up well. Ski Pen was around 10-15cm, with Boot Pen punching through to the old October snow on the ground. That old snow is just as weak as it ever was, 2-3mm faceted and striated grains. So, classic Persistent Slab Avalanche Problem. HS was in the 40-60cm range, but the slabs held the skis up just fine and made the skiing great if you could dodge all the shrubs and ground clutter.

Plenty of collapses with shooting cracks were felt. Didn’t take slope angles over 33 degrees and made sure to give overhead slopes plenty of room with the threat of remote triggering them. The shooting cracks were failing at the interface of the October snow. There were a couple other weak interfaces in this shallow snowpack, with layers of SH and small NSF. Whole bunch of junk, but at least the slabs were keeping you off the ground. 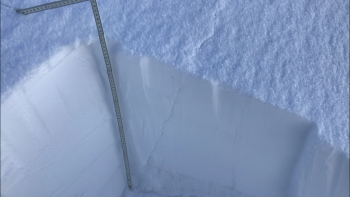 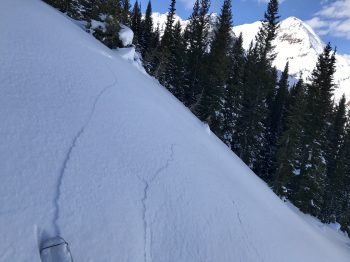 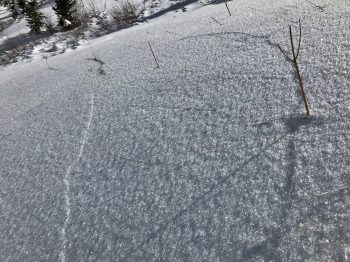