Avalanches: A handful of fresh avalanches with crowns looking sharp. D2 in the Martini on Richmond, D2 near Martini on an unsupported slope that triggered slope below, D2 near Ohbejoyful Peak, D2 Afley peak – all northeast and above treeline. A lil’ family of D1 Storm Slabs near Elkton below treeline on a steep east-facing feature from this past weekend (several inches of snow subduing crown and bed surface)
Weather: Mostly clear skies before noon then mostly cloudy in the PM over the Ruby Range – very light snowfall as well when clouds rolled in. Moderate westerly winds transported snow above treeline for most of the day (some near treeline but not as consistent). Loading looked reasonably efficient on many alpine peaks/ridges in the Ruby Range. Looking to the east towards White/White Rock massif noticed very little drifting (not sure if winds were relaxed or there is just less available snow for transport in the area)
Snowpack: I moved through a variety of southeast and easterly terrain features near and above treeline without signs of instability. Only jumped on smaller slopes or those close to 30 degrees or less. Minimal cracking on small drifted features even with active loading – snow felt a bit top-heavy. Was able to kick off a few human-sized cornice chunks on an actively loaded ESE alpine face without result – snow felt top-heavy but still soft and fist hard. Dug a profile on a drifted easterly-facing feature near treeline without propagating results, but the structure looks untrustworthy at the 1/19 interface (see photo). SE slopes in this area had a poor-looking facet/crust weak layer below that past week’s snow, but I wasn’t able to find more than 12″ of fist hard snow resting above so I did not perform any stability tests. 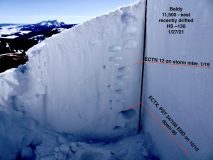 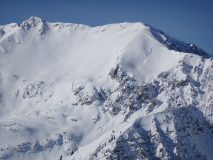 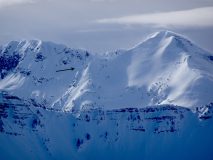 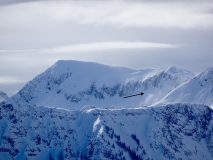 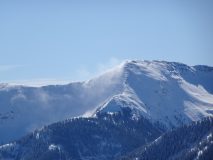 Example of drifting during the day 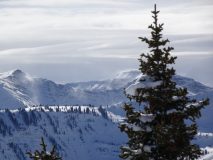 Snow transport at upper elevations in the Ruby Range 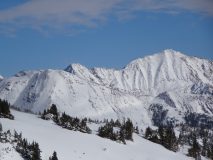