Avalanches: More small loose wet avalanches were noted. All small in size. Still lots of terrain that hasn’t shed, if it is going to shed…

Observed 2 other new and notable slab avalanches. They both released since the last round of snow and look reasonably sharp or fresh. These were both viewed from far away so more specific details would just make for a poor estimate. Both failed on NE facing slopes between 11,700ft and 12,000ft. The avalanche on Ohio Peak looked more like a D1.5 while the avalanche out int he West Elks was a D2.

Snowpack: Headed over to some north-facing terrain on Carbon that had previously avalanched back on February 6th. At 10,500ft the average HS was 155cm’s in undisturbed areas. I chose to target a small section of slope in the area where you could still see one of the old crowns running through the slope. North at 10,900ft. Here the HS dropped to right around 100cm. About 40cm’s down there was an obvious interface of fist hard weak facets. On top of those facets was a F to 1F slab. The most recent storm made up the upper 20cm of that slab. As I continued to dig the slope collapsed on those facets and I got the privilege of watching that collapse run through the pit. Stability text complete. Packed up and didn’t overstay my welcome any longer.

The 3/10 interface was under about 20cm of snow at this location. Currently, there didn’t appear to be a notable issue at that interface. So the layer of concern would be on slopes that previously avalanched and have now refilled with enough snow to form a new slab. The warm temps are of course further settling the upper snowpack and low angled northerly facing slopes had a moist snow surface. 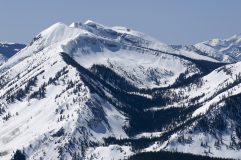 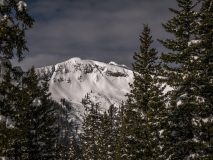 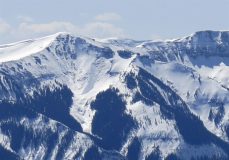