Avalanches: One large avalanche that broke during the early morning of 2/6 on a steep, cross-loaded, north-facing bowl off Carbon. Seems to have broke within old snow.
Weather: Moderate west winds, partly sunny
Snowpack: New snow ranged from 12-14″. Widespread collapsing and cracking on north-facing slopes off of Carbon. Slab is soft lower on the face and is where most of the collapsing/cracking occurred. As we moved higher up the face, the slab stiffened and supported the weight of a skier. Around 11,000ft, snowpack height averaged 150cm and surface snow has stiffened due to wind.  Blowing snow was observed from ridgetops all day on to easterly facing slopes. 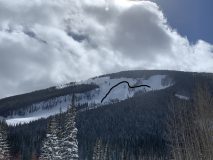 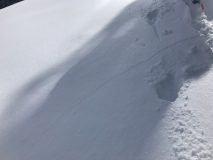