Avalanches: nothing new to report
Weather: clear skies, nasty cold at valley bottom along the slate gave way to pleasant conditions just a few hundred feet above valley bottom and above. Very light winds near ridgetop with no drifting snow observed.
Snowpack: Ascended generally easterly terrain to ridgetop. This is a snow favored area around Crested Butte with the deepest snow accumulations in the forecast area. No signs of instability noted like collapsing or cracking. Very little traffic in this area since the 12/29 storm. Near treeline probing revealed a snowpack around about 120cm or so deep with a very dense slab resting on top of the basal weak layer. See profile for a look at the snowpack in sheltered terrain in this area. The slab is dense, up to pencil hard BUT the weak layer remains uninspiring with minimal signs of improvement like rounding or increased hardness. Stability tests only confirmed the stubborn nature of human triggered avalanches, you would need to find a thinner spot in the slab to get a result, but if you did, sure would be an ugly avalanche.

Went to have a look at the large, natural avalanche from 12/29 on Purple Ridge to test adjacent slopes and identify how deeply it failed. Probing through part of the bed surface revealed that this avalanche failed very near the ground. Even with 20cm of refilled snow on the bed surface, the snowpack was generally only 30 to 50 cms deep in total. Tests adjacent to this slide produced an ECTP 16 on the same interface just 20 to 30cm above the ground. Probing hangfire showed 150 – 200cm right below ridgetop quickly tapering to 130cm-ish 30 to 50 feet below ridgetop. The slab in this drifted area was mostly pencil hard helping to insulate the weak layer from the weight of a person, but I was surprised at how poor the weak layer continues to look (4finger hard) and I still remain uninspired to test the waters on big, drifted terrain features. Definitely stubborn to trigger but not confidence-building assessments. Bed surface of this previous avalanche path consists of lower density, small-grained facets sitting on a slick, crusty bed surface….a recipe for certain avalanches once it is reloaded by a significant storm. 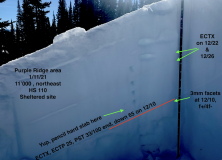 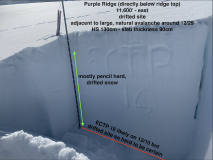 Looking at a portion of the crown from the large, natural avalanche from around 12/29. Test site was lookers left off photo.