Avalanches: Remotely triggered two avalanches from ridge top. The first was from ~250 feet away while moving towards the top of a steep open slope, D1.5 with debris piling up deeply in the terrain traps below. The second was triggered while traversing the flats above a steep open slope. This avalanche was a D2 that ran 200+ feet.
Observed 1 small storm slab on a North aspect BTL as well as a D1.5 Persistent slab on a SE aspect BTL. Both likely ran Saturday.
Photos of previously reported avalanches from Sunday 1/31 in Elk Basin on near treeline southeast slopes.

Weather: High clouds drifted in making a warm day feel a bit cooler. High temps were at or just above freezing with calm winds.

Snowpack: The snowpack did the talking for us on this tour. We got a booming collapse as soon as we gained the ridge and while this lower angle slope did not run, it was obvious that conditions were right to produce an avalanche. The next couple steep, suspect slopes held strong as we stomped from the ridge and it wasn’t until we started moving towards the next slope that we got a faint collapse in the flats around a few trees about 250 feet from the top of the path and released the first of two remote triggers. This slope had little to no drifting, failing at the 1/19 interface down 47 cm. F-1F slab resting on F hard, large-grained near-surface facets(ECTP15 just above crown). We decided to continue up to one more path in order to gain a bit more information. After traversing across the top and moving from a weak and unsupported structure onto a drifted portion of the slab, we were able to get a collapse and remote trigger a D2 failing at the same interface down 55 cm in this drifted start zone(ECTP13 at the crown). Overall HS in this area has nearly doubled since 1/19 and averaged 120 cm. 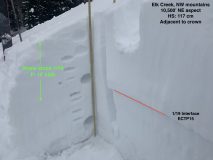 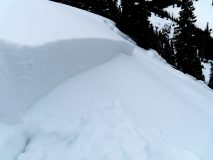 Crown line from remotely triggered Persistent Slab on a drifted, northeast slope at 10,500. 2/1 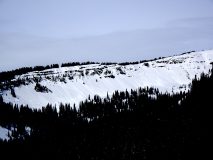 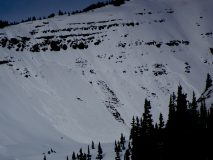 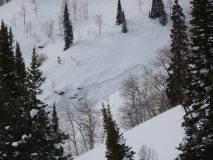