Weather: Cold start with snow showers tapering off. Felt the warmth midday with the sun peaking out for a few hours. Low-level clouds were drifting by keeping the Ruby Range and points north in the clouds.

Snowpack: 10″ new snow. Toured on primarily West aspects below tree line. Got lots of feedback from the snowpack with collapses in the flats, in the trees and shooting cracks/shattering on slopes up to 35 degrees that had not already failed. The weak layer is 15-25 cm of large grain facets and crust/facet combos near the ground (depending on exact location).

Got a look at a few steep easterly slopes which had previously avalanched however that evidence was not very obvious. On slopes that had slid, was only able to get a bit of loose surface snow on slopes greater than 37 degrees to move as these paths refill. Light to moderate WNW  winds were moving small amounts of snow onto leeward aspects near tree line. Rest in Peace, JS 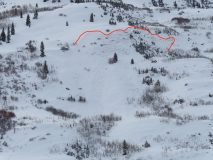 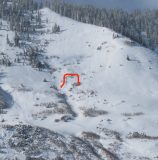 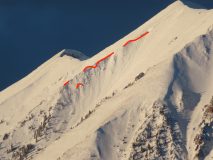 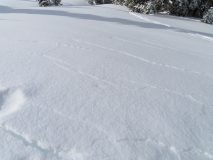 Slopes up to 35 degrees that have not failed yet would shatter easily. 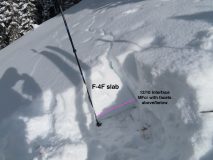