Avalanches: Widespread cycle of small wet loose avalanches today above treeline in the Ruby Range (~40 avalanches), generally D1 in size. We had good views of abundant activity on east through south aspects, limited views of westerly aspects. There were fewer slides that initiated near treeline and only a few slides closer to town on peaks like Gothic and Mt. Emmons. Did not observe any slides below treeline.
One small wet loose triggered a large persistent slab on an east aspect near treeline of Schuylkill Ridge today around noon.
Weather: Few clouds, calm winds, spring-like temps.
Snowpack: Today’s goal was to target persistent slab structures on paths that ran in February on northerly aspects. We sampled the upper flanks of a couple of paths, one that ran in early February and the other that ran in mid-February. Despite a lack of signs of instability and non-propagating failures in multiple test locations, the structures on old bed surfaces don’t inspire a whole lot of confidence. Slabs are generally 40 to 45 cm thick (F to 4F) over Fist hard, 1.5-2.0 mm facets. Instabilities seem fairly isolated for the time being on the slopes we tested, but I would expect that to change with additional loading. 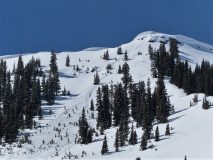 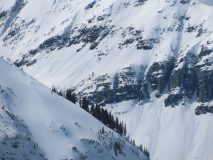 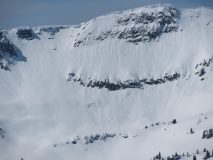 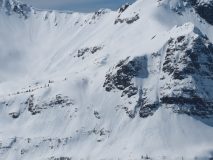 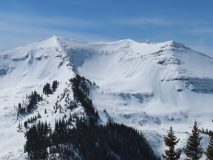 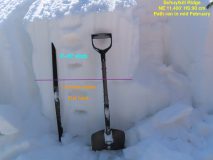 Pit from upper start zone which avalanched in mid-February