Subject: Other Than Surface Issues, The Deep Snowpack is Holding Up Well.
Aspect:
Elevation: 9,500-12,500

Weather: The high temperatures can speak for themselves. The high clouds thicker in the afternoon helping to cap the warming, but they may have helped green house some slopes. At the highest elevations traveled winds were generally light, with some moderate gusts. Couple rumbles of Thunder in the late afternoon.

Snowpack: More or less the same story on a different day. The snow surface is transitioning, so there appeared to be less natural loose wet avalanche activity today. However wet snow could still be human triggered on steep slopes in the upper 30 degree range. A wet or moist snow surface is making its rounds at all elevations and has stretched into some NE slopes.

Never ran into something that felt like Wet Slab conditions. The layer of snow deposited by the early March Storm is thick, strong and will need time for water to move through it. Probably going to need a shallow snowpack area like a repeater avalanche slope or steep cliffy terrain, or other below average thin snowpack areas, somewhere that water can get through that otherwise thick layer of snow.

Dug in a very snow favored part of our forecast zone. 28 degree, South aspect at about 10,700ft. Protected slope that felt like a solar oven. HS 275. Wet snow was down to 40 cm, with boot pen close to the same at 1pm. Below that wet snow there was a couple of ~3cm layers of large grain moist snow in the next 30 cm’s of the snowpack. The 2/28 interface was non problematic and 110cm’s below the snow surface.

Dug again in Washington Gulch on the flank of Gothic Mountain. SSW aspect, 28 degree slope, 10400ft. HS 305. Wet snow was down ~25cm and again boot pen was similar. There were some thin ice lenses in the upper snowpack, but again the water was far from impacting the deeply buried 2/28 interface. 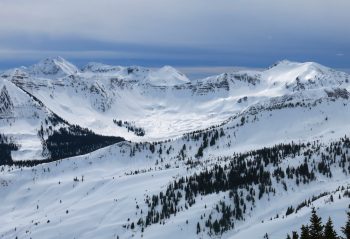 Shiny snow surface at the end of the day 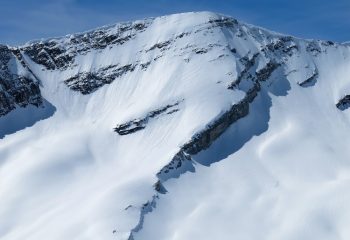 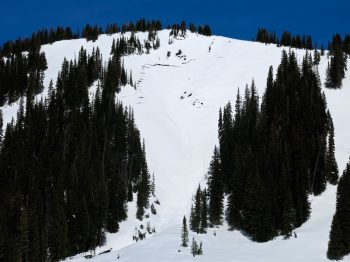